The whale: mascot for the environmental movement and sacred prey

The ethics of whaling are determined by whether one understands whales as a resource or as endangered species. 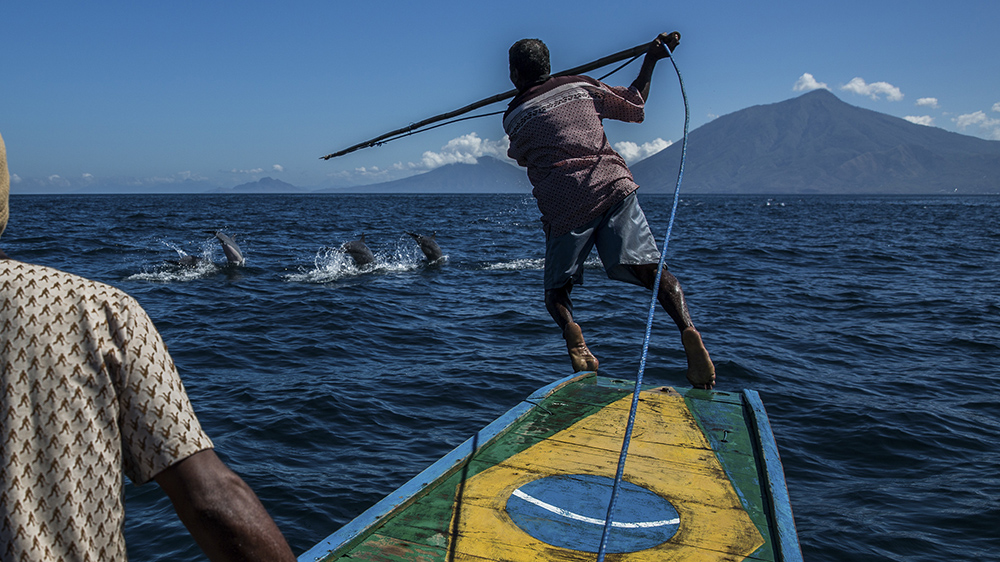 Marine hunters in Indonesia have to reflect on what the appropriate relationship between humans and whales look like.

“Whales have held a strong place in western imaginations of nature and the environment for a long time,” says Florence Durney.

Durney is a social anthropologist and examines how these notions affect marine hunters in Indonesia.

“Whales have been seen as mysterious, sometimes dangerous, but definitely attractive, monsters of the deep which we in the West have exploited to great effects. They were hugely important for developing Western capitalist economies.”

Changes in how the whale was viewed put whaling to a halt. In the 1980s a moratorium was enforced for commercial whaling, with exceptions made for groups that fit the label “indigenous” and “subsistence hunting”.

Florence Durney is researching the people of Lamalera, marine hunters in Indonesia. The Lamalerans have to deal with two questions: Who are they, and what do they perceive as the appropriate relationship between humans and whales?

From industry boom to environmentalism

Humans have hunted whales since prehistoric times. Industrial whaling gained momentum in the West in the early 18th century, when whale oil was used for soap, lamps and the lubrication of machines. In the 20th century, the demand for fat grew and the invention of fat hardening made it possible to make margarine from whale oil.

“The meat had least economic impact. In the US, it was used for dog food, among other things. Eventually, markets emerged for different parts of whale bodies beyond oil. For example, whale bones were used in corsets,” says Durney.

In the course of the 20th century, good alternatives to whale oil appeared. In the oceans, the whale was about to disappear. Then the history of the sea animal took a turn.

The whale was central, not a particular whale species. In the same period, scientific data clearly showed that industrial capture had led to the near extinction of entire whale populations.

“Whales now become a very interesting case of human excess. They reveal the sins of humanity and the dark truth of what humans are capable of doing to other species and other ecological contexts on this planet,” says the anthropologist.

“It became ‘common sense’, but also symbolically important, to save the whale.”

Researchers at UiO are studying relations between humans and aquatic mammals in maritime areas in East Asia. They look at religious beliefs about whales and other marine mammals, festivals and ritual traditions related to the animals, as well as marine nature conservation projects.

The goal is to understand how social, economic and environmental changes affect human-animal relationships.

The relationship between whales and humans transformed from one defined by exploitation to one centered on conservation. At the international level, the International Whaling Commission (IWC) went from managing catch quotas to working actively for conservation. As early as the 1960s, a proposal for a moratorium on commercial whaling was discussed. It was adopted in 1982 and implemented in 1986.

Indigenous groups, but also anthropologists and other professionals, argued for certain exemptions.

“The goal was to protect communities that had traditional relationships with these animals from the moratorium. And out of that effort came a concept called Aboriginal subsistence whaling.”

Durney emphasizes that the intentions behind the effort were good. However, the decision also had some unintended impacts.

“In differentiating Aboriginal subsistence from commercial whaling, it was immediately implied that indigenous and Aboriginal peoples don't have a right to use these animals for commercial purposes. This is hugely problematic and historically inaccurate, as these communities as part of their ‘traditional practice’ have hunted and traded these animals as a commercial object for many, many generations.”

Whales are both part of cosmology and economics

In Indonesia, the community of Lamalera, with whom Durney has done her fieldwork, hunts marine animals extensively. The whale is central, but they also hunt for dolphins, rays, swordfish and a number of other pelagic fish.

“They worship ancestors and their ancestors bring animals for them to hunt. Then it is their job to accept the blessing of their ancestors through hunting, and in that way sustain their community. It's a closed loop cosmology.”

Indonesia is not a member of the IWC, but national legislation is in line with international rules: Those permitted to go whaling are those who fit the Indonesian term masyarakat adat – small-scale, traditional groups with historical roots in the geographical location.

But even though Lamalera’s people follow ancient cultural traditions when they go hunting, that does not mean that there aren’t financial issues involved.

“Those are not mutually exclusive categories. Whaling is ritualistically, psychologically and sacrilegiously important, and also a practical resource that puts a roof on your house, food on the table and pays for your kids’ school fees.”

The problem is those concerned have not been involved in making the distinction between commerce and subsistence.

“Especially in the West, we have defined indigeneity as being outside of markets, and outside of commercialism. But that doesn't work for many people's lives and never has, because there are different paradigms for thinking about human-animal relations.”

Rules are made at a distance

The global discourse on the protection of whales from industrial capture shaped international regulations, which in turn operate locally in Indonesia. Many Lamalerans are critical of rules that are imposed from the outside.

“Several have pointed out to me that those who have a say in the debate about their lives, have never even seen a chicken killed. The intensity when exposed to an image or a video about what happens in the hunt is all the more shocking to them because of that.”

The hunters relate to the whale through the role it has in their cosmology. But they also become intimately acquainted with the power of the whale when hunting from small boats with harpoons. Durney believes distance is an important factor in the mismatch of ideas about what is appropriate to do with a whale.

“An average person has never met a whale, and most likely never will. They will never touch one or have any kind of interaction.”

Through nature documentaries, news and travelogues, however, they get closer to the animals and can form opinions about the animal and what is right to do with it.

How to be traditional enough

When the Lamaleran hunters are required to be “indigenous” or “traditional” in order to continue whaling, they, like other similar groups, experience expectations of how to behave in order to be traditional enough.

“The need to show people that you are traditional is a double-edged sword. It's great to celebrate traditions. But it still threatens cultural self-determination, as it must be up to each group to decide what their traditions are,” says Durney.

If you google Lamalera, you will find pictures of men with harpoons at the front of a boat. The tourists' images contribute towards creating this specific image of the tradition, and freeze it in time.

“Those kinds of images appeal to a western hunter-versus-nature narrative. At the same time, they give a skewed picture of whaling.”

Durney believes that research on groups engaged in small-scale whaling shows how extensive global discourse on the relation between humans and animals can have a large impact – in law, in economics and in people's lives.

“The problem is that people have really strong feelings in all directions, and ultimately, it is not possible to please everyone.”

Florence Durney is a postdoctoral fellow in the project Whales: Aquatic Mammals, Devotional Practices, and Environmental Change in Maritime East Asia at the Department of Cultural Studies and Oriental Languages at the University of Oslo.

The project focuses on ritual practices and changing human-nature relations in the Asia-Pacific region. Aike Peter Rots is the Principal Investigator.