Ritual Intersections and the Regulation of Religious Offense 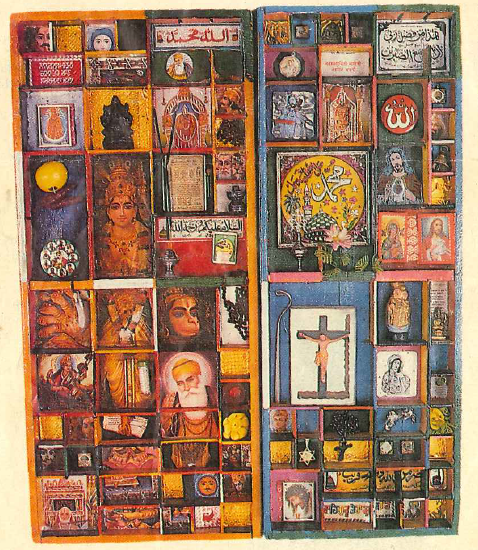 Model for an unending wall of all-religion shrines

How does a state as religiously plural as India hold together? This project examined the outcome of ritual intersections and the regulation of religious offence, both of which are far more prevalent in India than in contemporary Euro-American contexts.

As previous research has shown, sacred Sufi tombs and Muslim mystics are still consulted by people from variegated religious backgrounds, many Hindus still incorporate the Sikh gurus and Jesus in their everyday ritual invocations and some Muslims still turn to Hindu goddesses for protection. But how do such ritual crossings “work”?  And how do they promote interreligious understanding beyond the ritual moment?

Research on regulation of religious offence has so far been overwhelmingly normative in its debates of whether such regulation entails a problematic or necessary limitation of free speech. In this project we rather turned our attention to the wider outcomes of such a legislation, including its apparent success in limiting controversies despite the tempered discussions it occasionally may trigger.

The project’s research questions were investigated by means a series of sub projects that covered a broad spectrum of religious traditions, locations and social arenas. The case studies are presented in videos.

Rituals of Unity in Hajo, Assam

Shrines, shops and souvenirs: Visualising cosmopolitanism in the bazaars of Amritsar

The burden of security: Spatial regulation of religious offence and the geographies of enforcement

The waking god: Desire and devotion at a sacred site in Bangaluru

The project was funded by the The Research Council of Norway

People still cross religious boundaries in pursuit of divine intervention or insight, but not as as often and openly as before.

As the project came to an end in 2019, we decided to summarize our findings for you in a podcast. The podcast was recorded and put together by Devleena Ghosh at the University of Technology Sydney.

Here we discuss how religious communities cohabit in Assam and Arumachal Pradesh, where the religious demography includes sizeable Adivasi populations. We describe the boundary work of Sikhism and Ravidassia in Amritsar and Banaras. And we suggest the inadequacy of studying Catholic churches, Kali temples or Sufi shrines as spatial centers of any closed religious tradition.

As we worked on this podcast, we occasionally stretched our legs in the surrounding neighbourhood. Here we came across a sign that resonated strongly with our research. "Religion unites, not divides", it says, as if wanting to reverse the trend of religious self-sufficiency. But as our podcast suggests, there is more to this trend than meets the eye.

Film: A Kali Temple Inside Out

This ethnographic film follows devotees of the Hindu goddess Kali to understand why devout Hindus may well visit Sikh temples and Sufi-Muslim tombs besides temples for divine assistance.

India//Norway 2018, 1 h 23 min
Language: Hindi, with English subtitles
An ethnographic film by Dipesh Kharel and Frode Storaas, based on the research of Kathinka Frøystad
Awards: Winner of the Richard Werbner Award for Visual Anthropology, 2021

Religious boundaries are not necessarily as sharp and antagonistic as the news media lead us to believe. This film shows the everyday life inside and around a Kali temple in the city of Kanpur, Uttar Pradesh, India. The temple building houses a Kali shrine and a smaller Hanuman shrine, and visitors to the site present offerings in both. Through a closer presentation of a priest and three devotees, the film shows why this temple is so important to them. Yet they also occasionally visit holy places of other religious traditions, whether to learn or seek additional divine support. The film is thus a silent critique against the obsession with religious conflict in contemporary debates.

God is one, the religions are made by humans, as the priest concludes in the film.

The project group meet up annually to compare notes, co-supervise PhD students and plan ahead.

A few months before the project officially started, the project partners met to fine-tune their cooperation agreement, case studies and PhD recruitment procedures.

2.-3. January 2015 the project team reconvened, now with three of its PhD students, to compare notes and fine-tune its perspectives further.

By 2016 most of the project members were well underway with fieldwork, which made it highly fruitful to compare notes again.

In January 2017 the project members reconvened in Sydney along with a handful of external scholars to address the cosmopolitan potential of religious synthesis.

In June 2018 we invited a group of international scholars to the University of Oslo to discuss how religious offence can be contained in ways that prevent large-scale controversies.

The final event of the CosmAlt project was a writers' retreat in Delhi 25-29 March 2019.

Rather than organizing a conventional closing conference, the project members joined hands for a week to push joint writing projects forward and enhance research communication.

Below is an overview of some of the publications the CosmAlt Project has generated.