— Tools for the inclusive development of Ethiopia

The project  "Linguistic Capacity Building - Tools for the inclusive development of Ethiopia" is a collaboration between the University of Oslo, Addis Ababa University, Hawassa University, Norwegian University of Science and Technology and Center for Multilingualism in Society across the Lifespan (MultiLing). The project has received funding from Norad through NORHED and will run from 2014 to 2020.

The main aim of the project "Linguistic Capacity Building - Tools for the inclusive development of Ethiopia" is to increase the knowledge and capacity at Ethiopian universities to develop resources for disadvantaged spoken and signed languages, and with that provide the possibilities for children and adult speakers of these languages to use them in education and other democratic arenas that are important for the development of modern Ethiopia.

By disadvantaged languges we mean those that are not fully researched, and that lack resources such as orthographies, descriptions of grammar, dictionaries and hence, teaching material. 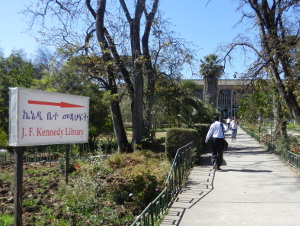 There are three cornerstone outcomes of the project. They are capacity building for:

The project will finance 18 MA scholarships. It will further finance fieldwork and processing of field data for11 fully-funded and 3 partially-funded PhDs and a number of staff at the two universities and develop a network of people for each cornerstone. The networks wiII consist of students and staff at the Norwegian and Ethiopian universities taking part in the project, but importantly also include representatives of local authorities and some local educational institutions. The cross-cutting issue of gender is crucial, and we aim for as many women as men for the scholarships.

The project wiIl strengthen existing MA and PhD programmes and help develop two new MA programs, one in sign language at AAU and one in muItilingualism and communication at HU.

In addition the Norwegian professors and staff will offer courses and supervision at MA level (in both new and existing courses) and at PhD level.

A language technology group will be established at the Linguistics department of AAU and tools be developed under the supervision of the Norwegian staff. The tools will be vital in the development of orthographies, grammars, dictionaries, and primers. Corpus development for four written languages will be crucial for the project, for technology development inside and outside the project. For the spoken and signed languages, multimedia interfaces will be developed.

The following outputs are planned within the project:

More concretely, we will investigate four groups of languages

Participants in the project

There are an estimated 2.5 million deaf and hard of hearing people in Ethiopia according to the World Bank Report released July 2012. There is no record indicating the actual percentage of people using Ethiopian sign language (EthSL). However, more than half of the deaf population is believed to be speaking EthSL. The number of deaf Ethiopians whose mother tongue is EthSL is growing every year.

The structure of EthSL is not yet researched and documented. What is being taught to deaf children as EthSL today is only sign vocabulary, not the structure of the language. In all schools for the deaf, children are learning the sign vocabulary outside context, which contributes very little to language development. As a result deaf children are needlessly stalled in Ianguage acquisition and its resultant effect is lifelong language and academic handicap.

Most pre-Iingual deaf Ethiopians exhibit lag in language development. They are finding it hard to pass national examinations and access secondary and post-secondary
institutions. It is the lack of knowledge on sign language that has caused the Iack of proper sign language teaching. Lack of research therefore is slowly damaging the deaf community. Many local authorities are under the misconception that EthSL is a kind of signed Amharic, and thus do not to give deaf children the opportunity to be taught in their own language. (Similar beliefs have been common in Europe in the past.) Even at AAU, the teachers of sign language find it hard to train new teachers since they do not know the structure of the language. Since there is no proper knowledge on the structure of EthSL, there is also a lack of teaching material.

Lack of research to prove that Ethiopian sign language is not a signed form of Amharic has made it difficult for the government both to ensure that “education of deaf is delivered in the most appropriate language” and to “take appropriate measures for facilitating the learning of sign language and the promotion of the Iinguistic identity of the deaf community” in accordance with the UN convention Ethiopia has signed. Some schools for deaf children teach the children American Sign Language, in the belief that it is the same. This would be like teaching French grammar as a mother tongue language to Norwegian children. The effects of this mistake can be serious: When they are taught a different signed language structure than the one they use, they tend to devaluate and even discriminate their own language as inferior. Second, the structure of EthSL might be compromised through these teachings if deaf people perceive the teachings as a guideline to how they should use their sign language.

Ethiopia’s population of 82 million speak 89 languages, plus sign language. Manifold social and cultural contacts among speakers of these languages are reflected in widespread bi- and multilingualism across the country. Linguistic diversity is realized at all levels of: the country, the region, the administrative units, the communities, the schools, the institutions, and the individual households. Amharic, and a handful of other languages, are used for inter-ethnic communication.

The number of speakers of the Ethiopian languages differs significantly, ranging from various million speakers to a few hundred only. Disregarding the endangered languages (28 according to UNESCO’s Atlas of endangered languages), which will not be the main focus in this project, there are approximately 60 more languages in Ethiopia; many of them in south-west Ethiopia, where project partner Hawassa University is situated. Many of these languages have a substantial number of speakers, for example, the Gurage language Silt’e has 1 million speakers, Sidaama (Cushitic) 3 million, Hadiyya (Cushitic) 1.6 million, and Wolaytta (Omotic) 3 million. Many of these are poorly studied and need reforms and standardisation in the description of orthography and grammar. Some languages also lack an orthography, proper grammatical descriptions and dictionaries.

Central documents both nationally in Ethiopia and internationally state that mother tongue education is essential for good learning and education, and thus for the development of the society.  However, even with good intentions in national reports, so far only 27 languages out of the country’s 89 languages have been introduced as medium of instruction and/or school subjects at primary school level, most of them from grades 1-4 (a handful more are about to be launched in education soon). lt is hoped that many more languages will be introduced in the coming years as the society keeps on demanding their languages to be used in education. Nevertheless, many of the languages introduced as subjects and medium of instruction in schools do not have proper orthographies, dictionaries, primers and so on.