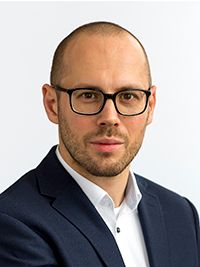 Garbacz holds a PhD in Scandinavian Linguistics from Lund University, Sweden (2010). His dissertation examined Övdalian morphology and syntax, being the first thesis on the topic since 1909. Övdalian is an East-Scandinavian vernacular, often considered the sixth Scandinavian language (along with Norwegian, Swedish, Danish, Faroese and Icelandic). Garbacz holds a Master's degree in Swedish philology from the Jagiellonian University in Cracow (2003). Since 2004, he has gained extensive teaching experiences from several universities in Nordic and other European countries. In 2014, he received the ILN educational award.

Garbacz's academic interests are syntax and morphology in Scandinavian languages, ​​as well as the connection between syntax and morphology within the framework of generative grammar. Furthermore, he is particularly interested in dialects and language history, including Swedish, Germanic and Indo-European language history, as well as etymology. He has language competence in several Germanic languages: Swedish, English, German, Dutch, Norwegian, Övdalian, Faroese and Icelandic. Currently, he is engaged in the project NorPol financed by the Norwegian Research Council and led by Toril Opsahl.