A travelogue from the Nordic Media students’ study trip to Copenhagen

As in the past three years, this year’s Master students in Nordic Media went in October on a study trip to the University of Copenhagen (KU), Denmark.  Professor Anne Jerslev at KU is a professor II at IMK, and had this year also put together a brilliant program to the students. 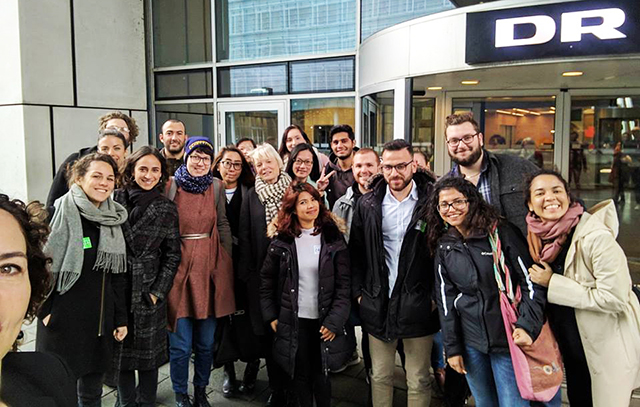 A visit to the Danish media house DR was one of the things the students enjoyed the most during the week. Here they met with the media researchers Lene Heiselberg og Rasmus Thaarup that shared how DR collect and use data in their productions.

As a mandatory component in a master programme in Nordic Media these days, the Norwegian series SKAM was also part of the week’s program. Professor Jerslev showed how the SKAM episodes constitutes a web of interactions, and that by watching the series one is by default active since the series plays out at a number of digital spaces.

Because the series is as known also an international success, several of the students could jump into the discussion with insights from her home country. In Korea, for example, SKAM addresses topics that are sensitive and seldom talked about, Annabel Yeseul Ha from Korea explained.

During the study tip to Copenhagen, the Nordic Media students also got to know the Danish media system. PhD student Julie Meise Münter Lassen spoke about Public service media in Denmark – strength and challenges, while associate professor Aske Kammer, from the IT University approached the topic from the perspective of The State, the Market, and the Danish Media System.

Another key component in the study program was Danish television series. Associate professor Eva Novrup Redvall (KU) lectured about The Danish TV drama, the production perspective, where she amongst others showed the importance of including the writer throughout the production process, a process that in many ways are similar to the SCRUM method that is widely used in IT-Projects.

The Killing (no. Forbrytelsen) and Borgen was also part of the program so the students got a visual taste of the series they had learned about. The screenwriter of the Bridge (no. Broen), Nikolaj Scherfig, closed the study trip by telling how they worked with the series, which has been a formidable international success.

"A lot of narrator talent doesn’t help if you do not have a market or interest," Scherfig explained, and admitted he had used elements from his own life in the series. By locating the story in The Bridge in both a Swedish and Danish context, the audience also doubled.

Far away from home

Despite the fact that the study trip is linked to the mandatory subject Nordic Media in an International Perspective at IMK, the study trip to the University of Copenhagen, Denmark is an important arena for building the important learning environment the students will be part of in the following two years.

Many of the international students share that they come to a new country and University far away from home without a close network around. Fellow students are therefore in many ways their new family for the next two years.

By being together for a week at the University of Copenhagen, spending social time together after lectures and having dinner organized by the University together, they definitely get to know each other, the students explained on their way back to IMK. And we as IMK-staff got the chance to get to know them!

Nordic Media is a two year Master programme offered at the Department of Media and Communication, University of Oslo, Norway. 20 international students are accepted to the programme each year.