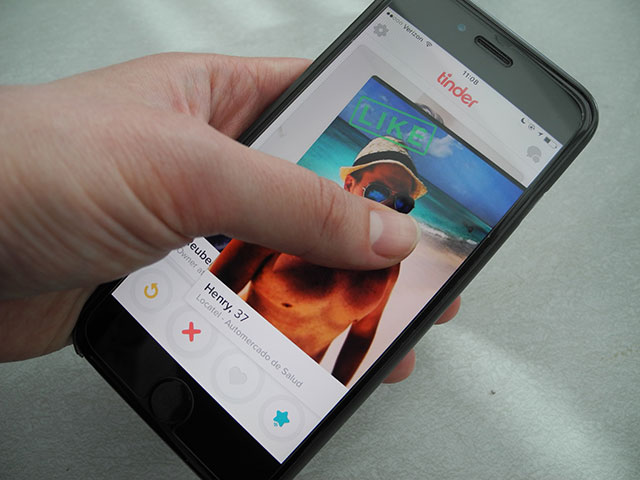 COMPLEX: Although Tinder is based on external appearances, this does not mean that its users are only interested in beauty ideals, body aesthetics and sex. Photo: Johannes Schmitt-Tegge/dpa/NTB Scanpix

“I kept hearing about Tinder, but hadn't used it myself – making it a perfect phenomenon for me to study,” says Ane Charlotte Spilde, a master’s student of media studies.

In her master’s thesis, she talks to Tinder users about their motivations.

In addition to her master’s thesis, she has explored Tinder's user interface, together with Steffen Krüger, an associate professor in media studies, with a focus on how it influences users’ thoughts and behaviour in specific directions. They have recently published their findings in the international journal Information, Communication & Society.

Lowers the threshold for saying yes – and no

According to Spilde, Tinder’s user interface creates distance between users. She believes this can have both negative and positive consequences.

“The negative aspect of this kind of distance is that, in the worst case, users may treat each other with less empathy. However, a positive aspect is that Tinder facilitates greater experimentation, in terms of both identity expression and relationships,” she says, adding:

“On Tinder, many people are more willing to give a chance to people they probably wouldn't give a chance in face-to-face situations.”

The distance Tinder creates between users means that the social cost of rejecting someone is smaller than otherwise, according to Spilde.

Not only about sex

She believes the positive aspects of Tinder are often overlooked. The dating app is widely panned for being superficial and promoting a hook-up culture among young people. Spilde believes this criticism lacks nuance and builds on an outdated understanding of the interaction between humans and technology.

“It is perhaps more correct to say that Tinder is a channel that facilitates the hook-up culture. However, it does not create a hook-up culture or superficial, sex-fixated people. It is much more complex than that,” she says.

The master’s student has interviewed Tinder users to gain insight into their motivations. Both previous research and Spilde’s findings indicate that Tinder users have a much broader spectrum of motivations than merely finding a sex partner.

“Most people’s motivations are to get out and date or find a long-term relationship. Some people use it as a form of entertainment or to boost their self-esteem. Hooking up is a marginal part of users’ motivations,” says Spilde.

She points out that Tinder is superficial in the sense that it is based on outward appearances, but stresses that this is not synonymous with users focusing solely on beauty ideals, body image and sex.

“They decode all the outward signs in much more complex ways, ascribing people different characteristics, class affiliation and tastes, based on the images they are shown,” says Spilde.

Found love in the process

Spilde’s research also had an unexpected consequence. She was told to download the app and test it out for herself, in order to be able to see things from her interviewees’ standpoint and understand them better.

“So I did, with the sole intention of testing the application and seeing how it works first-hand.

But fate had other plans.

“After a week, I ended up going on a date with a guy whom I would probably never have gone on a date with otherwise, because I thought he wasn’t really my type. However, I enjoyed chatting with him and liked his sense of humour, so I thought why not go and have a drink with him. Now we have been together for almost two years!”