Head of Department Frode Helland has written the book Ibsen in Practice: Relational Readings of Performance, Cultural Encounters and Power. 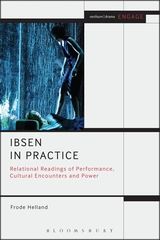 The volume reveals an astonishing richness in the theatrical approaches to Ibsen across the world: it considers political theatre, institutional 'high art', theatre for development, queer and transgender theatre, Brechtian techniques, puppetry, post-dramatic theatre, rural village performance and avant-garde touring companies. Investigating varied renegotiations of his drama, including the work of Thomas Ostermeier in Germany and other parts of the world, versions of A Doll's House from Chile and China, The Wild Duck in Iran and productions of Peer Gynt in Zimbabwe and Egypt, Frode Helland provides a deeper understanding of a cross-cultural Ibsen. The volume gives an in-depth analysis of the practice of Ibsen in relation to political, social, ideological and economic forces within and outside of the performances themselves, and demonstrates the incredible diversity of his work in local situations.

Read more about the book here.