The Norwegian Institute in Rome has been a meeting place for Norwegian researchers and students since 1959, and is one of many foreign academic institutions in Rome. 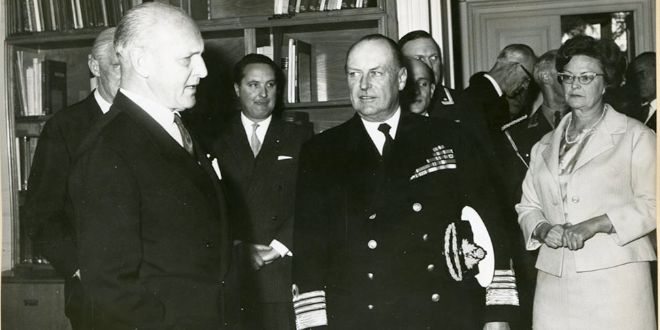 The Norwegian institute in Rome was established on 13 February 1959 by the University of Oslo, with the initial remit to support ‘researchers, architects and artists’ who wanted to spend time studying and working in the city.

Historians, archaeologists, and art historians had long desired a permanent Norwegian research presence in Rome. The demand for a national institute in Rome grew throughout the 1950s, garnering widespread support from the public and private sectors. The archaeologist Hans Peter L’Orange and his student, the art historian Hjalmar Torp, were key  set about winning the backing of politicians, academics, private individuals, and the University of Oslo.

Norwegian research in Rome predates the founding of the Institute. The internationally renowned researcher in art history and classical archaeology, Hans Peter L’Orange moved to Rome in the late 1920s. Here, his academic reputation was established in the 1930s with his work on the Arch of Constantine and Late Antique sculpture.

Leaving Rome at the outbreak of the Second World War, he moved to Oslo to take up a post as the first professor of classical archaeology in Norway. With the end of the war in 1945, L’Orange returned to Rome to recommence his research. Of particular note from these years is the investigation of a small 8th century church, known as the ‘tempietto’, in the northern Italian town of Cividale del Friuli.

This important and innovative study of Lombard-era architecture drew international attention to L’Orange and the team of researchers, which included the Danish architect Einar Dyggve, the archaeologist Kristian Jeppesen, and the art historian Hjalmar Torp.

The project – which would later become a focus of research at the Institute – further demonstrated the need for a Norwegian centre in Rome.

The increasing international fame accorded L’Orange (both he and Torp were later made honorary citizens of Cividale del Friuli and would also both go on to become Directors of the Institute) helped to convince his fellow Norwegians on this matter.

They were supported by the shipping entrepreneurs Nils Astrup and Thomas Fearnley, as well as other generous donors who offered to partially finance the acquisition and foundation of such a centre.

For the first three years, with L’Orange as Director, the Institute operated out of a rented apartment on via Corso Vittorio Emmanuele 209. Then in the early 1960s, the Institute acquired and moved into the villa on viale Trenta Aprile 33, overlooking the city from the Giancolo Hill, which is where it remains today.

In order to disseminate and promote research to the international academic community, the Institute established its own publication focusing on classical archaeology and art history. "Acta ad archaeologiam et artium historiam pertinentia" (ACTA) has been published from 1961 to the present day, with the Director acting as editor.

ACTA currently publishes contributions in English and Italian.  ACTA has been available digitally from 2017.

In the 1970s, the name of the Institute was changed to ‘The Norwegian Institute in Rome for archaeology and art history,’ reflecting the focus of the research then being carried out. Later, the name was changed again to ‘The Norwegian Institute in Rome’, in recognition of its broadening mandate to embrace multiple disciplines within humanistic sciences including language, literature, and culture.

The Institute continues to be guided by the principles emphasised by L’Orange in 1955: ‘The primary objective of the Roman institute is to be an active contact system between the Norwegian researchers, artists and architects and the multiple Roman and Italian institutions and individuals.’

Rome is host to a large number of Italian and foreign research institutes. Many of these specialize in the study of antiquity and art history, as well as a broad range of humanities and social science disciplines. Academic collaboration is formalised through two organisations, both established shortly after The Second World War. The Associazione Internazionale di Archeologia Classica (AIAC), The International Union for Classical Archaeology) was founded in 1945, and the Unione Internazionale degli Istituti di Archeologia, Storia e Storia dell’Arte in Roma (UNIONE, The International Union for Institutes of Archaeology, History and Art History) was inaugurated the following year.

Both organisations are important spaces for collaboration between their Italian and International members, and reports of their members’ activities are issued annually. Hans Peter L’Orange became the first Norwegian president of UNIONE in 1965, and later Norwegian Directors have been board members and strong supporters of the organisation.

The Norwegian Institute has also collaborated on several archaeological fieldwork projects with the other Nordic academies in Rome, starting with the excavation of an Iron Age village at Ficana in 1976. Beginning in 1981, the Norwegian and Finnish Institutes worked together on the excavation of the spring of Juturna in the Roman Forum. This project subsequently developed into a broader Nordic collaboration on excavating and documenting the famous temple of Castor and Pollux.

The Institute has also partnered with the American Academy in Rome in the excavation a Roman private residence of the 3 rd century on the Palatine Hill.

From the very start, the Norwegian Institute allowed researchers and students the opportunity to see and study sites and monuments hitherto only accessible in books and through photographs.

Today, it continues to provide an exceptional opportunity for Norwegian scholars to encounter Rome in a unique way, to spend time interacting and working in one of the most historically and culturally important cities in the world.

The proximity to historical sites allows scholars to study works of art and monuments first-hand. Norwegian students of art history, archaeology, intellectual, religious, and cultural history, of language and literature thus get to enjoy on-site lectures as well as visits to museums, excavations, and monuments.

The Norwegian Institute has a longstanding collaboration with Italian authorities that also enables access for scholars to sites not normally open to the public.

The Institute fosters and facilitates academic research and provides opportunities to study in a Roman context. Scholars can also benefit from the wider Italian and international academic environment, which includes the libraries, archives, and collections of other academies and universities.

While the focus of research at the Institute at its foundation was the art and archaeology of antiquity and the middle ages, its scope has since broadened to encompass other historical periods and disciplines, including religious studies, intellectual history, literature, philosophy, philology, and the social sciences.

More information in Norwegian about the history of the Institute can be found in the books «På Klassisk Grunn» and «I H.P. L’Oranges fotspor».

Directors since the establishment:

The Norwegian Institute in Rome is part of the University of Oslo, and contributes to the national research and education objectives.