Violence permeates human history, but how do different societies perceive, process and narrate war and other armed conflicts? 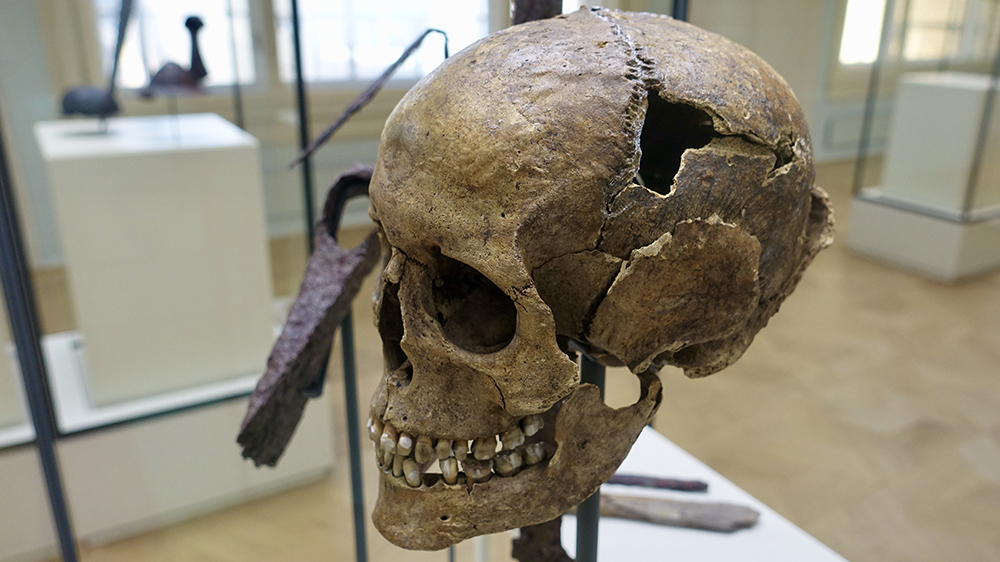 The research group will investigate what functions violence has had at different times. The photo shows a skull of a woman, who may have been a female warrior, found in a grave from the Viking age, Norway. Photo: Cultural History Museum Oslo, Creative Commons 4.0.

Violence is very often relegated to the peripheries of social order, constituting a break with it, unless performed by a legitimate actor, for example the state. However, historically, the right to use violence has been much more widely distributed, and it has not only served to disrupt sociopolitical order, but equally to maintain and even strengthen it.

Often, violence serves as a marker of difference across time and space. For instance, we speak of modern warfare and thus set it apart from both previous historical eras and non-Western experiences.

The research group want to break through these dichotomous and Eurocentric perspectives. We will investigate what functions violence has had at different times and how varied the phenomenon we call violence has been understood.

We want to discuss the use, role and legitimacy of various kinds of violence and its relationship to social ordering. In particular, we will challenge the notion of the nation state as the central agent of war. Instead, we will focus on forms of violence that have commonly been described as “irregular”. That is collective violence exercised by non-state actors in asymmetrical combat situations from antiquity to today, and from a more global perspective.

Another central area of exploration is symbolic violence: violence as presented in text, for example political propaganda, and symbols. We also want to explore how violence is presented and legitimized in contemporary social media.