Despite strict limitations enforced by the absolute monarchy, the public and culture of print in 18th century Denmark–Norway were diverse and vibrant. 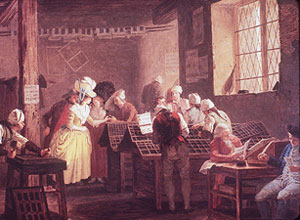 The print media of the 18th century display a surprisingly broad spectrum of genres. They were explored and developed playfully, in a game of ambiguity, criticism and jest. This development of genres occurred regardless of the strict limitations on freedom of print, through censorship and regulations of postage and privilege.

The research project “Diversifying publics and opinions under censorship: The Journals of 18th Century Denmark–Norway” explored this apparent contradiction.

As in Europe at large, a rich culture of periodicals emerged in Denmark–Norway. It was international in the way that characterizes this century, both in its origin and expression. Almost 200 different periodicals were published between 1720 and 1814. They opened up for a great variety of voices and employed a number of different textual strategies and genres. We aimed to explore the historical, political and literary traits of this diversity.

Our thesis was that the richness of the periodicals’ forms arose because of, rather than in spite of, the absolutist restrictions. Their playfulness and theatricality can be seen as productive responses to censorship. Our project wished to uncover these interactions. We combined perspectives and a complex of methodologies from history, history of ideas, literary criticism and history of law in our ambition to encounter the diversity we find in our material.

This produced new perspectives on the motley origins of the later history of Norway, a history traditionally written with a greater emphasis on homogeneity. By exploring the aesthetic and political practices of the period’s printed public sphere, larger social patterns emerged. The paradox “absolutism/pluralism” was our vantage point for this new history of the public sphere.

The project was funded by The Research Council of Norway.

The project digitalized and indexed Norwegian 18th century journals in cooperation with The National Library of Norway.