Legitimization of the Elites in Medieval Poland and Norway

How did elites in the European periphery legitimize their power in the years 1000–1300? This project compares Norway and Poland. 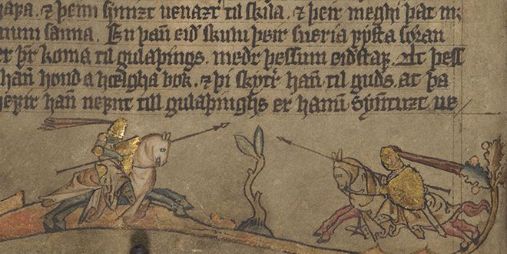 The current research paradigm stresses the monarchies and the Church as initiators of state formation in medieval Europe. Moreover, it describes a process of “Europeanisation” whereby models of statehood were exported from the center of Europe to its peripheries. Here the latter are typically viewed as passive recipients of central impulses, thus downplaying local traditions and political structures.

This view has been particularly applied to peripheral regions such as Scandinavia and East-Central Europe.

The project “Symbolic Resources and Political Structures on the Periphery: Legitimization of the Elites in Poland and Norway, ca. 1000-1300” addresses these questions in novel ways. First, it views peripheral polities through the lens of their elites as key players in the emergent polities and as active intermediaries in the contacts with ‘core’ European regions. Second, it argues that peripheral regions should be studied on their own premises, not as areas primarily emulating central regions.

We thus compare the case studies of secular and ecclesiastic elites in Poland and Norway in order to comprehend the general conditions, means, and effects of elite legitimation on the European peripheries.

The following questions guide the investigation:

These questions will be considered in a comparative fashion, where the project investigates the similarities and differences of the two cases of elites. We will investigate both the elites’ ways of self-legitimation and how they took inspiration from the political and ecclesiastical centers in Europe to boost their positions at home.

The theoretical point of departure is Pierre Bourdieu’s notion of “symbolic capital”, which he defines as the material and immaterial resources the members of the elite employed to manifest and demonstrate their legitimacy, i.e. deservedness to rule to their peers and subjects.

Due to the absence of stable institutions able to enforce sociopolitical hierarchies during this period, the project also will adopt a conflict-oriented perspective. Political entitlement and recognition of the dominant positions constituted limited resources. The factions of the elite such as kings, dukes, bishops and members of the aristocracy, had to struggle for these through delegitimizing their competitors and elevating themselves.

In terms of empirical phenomena, the project focuses on the representational and competitive aspects of coinage, elite graves and burials, dynastic continuation, ceremonies and rituals, conflict resolution and mediatory strategies, creation and veneration of saints and relics, ruler ideology, uses of the past, legitimation of episcopal and abbatial power, use of pre-Christian/Christian symbolic capital, hospitality and gift-giving.

The project gathers a Polish-Norwegian team consisting of medieval historians, archaeologists and numismatists, who will present their results as co-written articles.

The project 'Symbolic Resources and Political Structures on the Periphery: Legitimization of the ELITES in Poland and Norway, c. 1000 - 1300' (2019/34/H/HS3/00500) is funded by Norway Grants in Poland through the Basic Research Programme operated by the National Science Centre.