New Signs of Antiquity: The Uses of Latin in the Public Culture of Fascist Italy

This project explores the role and functions of the Latin language in the public culture of Italian Fascism from 1922–1943. 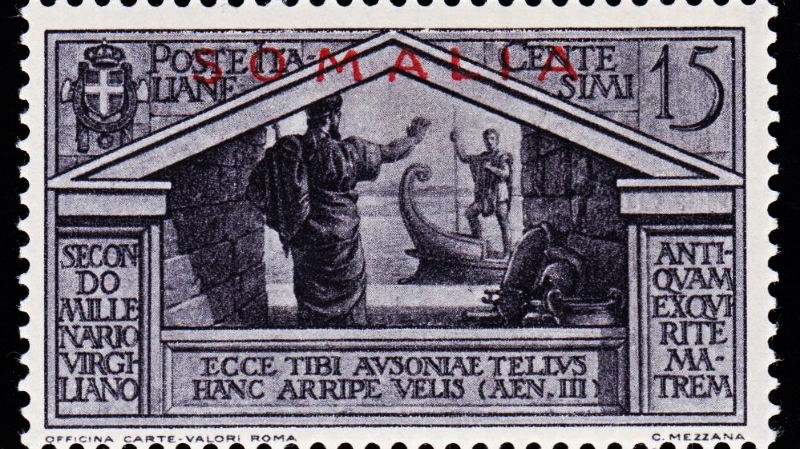 One of nine stamps issued on the occasion of Vergil's 2000th anniversary (1930) with a Latin quote from Aeneid 3.477 ("Before you is the island of Ausonia! Make sail and seize it!"). Illustration: stampboards.com

"Rome is our starting point and our point of reference," Benito Mussolini declared in 1922: "it is our symbol or, if you wish, our Myth". Signs and symbols of Rome were everywhere in Fascist Italy, from the symbol of the fasces to the "Roman salute".

The ancient language of Rome, too, was part of the Fascist "cult of Rome". Apart from Dux and SPQR, Latin words, phrases, and even short texts featured in, for instance, banners, stamps, and inscriptions all over Italy. Mussolini himself exclaimed, in Latin: "Civis Romanus sum".

In this project, an international team of researchers explores how and why Latin was deployed in Fascist propaganda. While previous work has primarily focused on literary texts, this project investigates the uses of Latin in Fascism’s material and visual culture, including public spectacles, grand-scale exhibitions, and architecture.

The project scrutinizes the linguistic and literary features of these "Latin signs", their immediate material contexts, as well as the wider discourses on Latin that gave new ideological significance to the language of ancient Rome.

We welcome guest editors and authors who would like to contribute transcribed texts and/or introductions for publication in FLT. Please contact us via flt-contact((at))hf.uio.no.

The Norwegian Institute in Rome.