This project explored the moral grounds of claims over territory and natural resources in Antarctica, as well as the moral legitimacy of the Antarctic Treaty System. 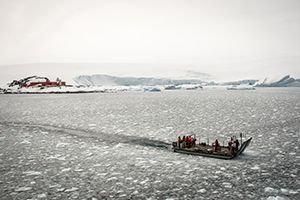 Global pressure over natural resources in Antarctica will mount in the coming decades. Three pressing factors might motivate states to claim exclusive rights to Antarctica: climate change, dwindling natural resources in occupied territories, and the fact that, by virtue of Article IV of the Antarctic Treaty, the question of sovereignty in the White Continent remains unresolved. We are thus at a unique point in history to influence the ethical dimensions of the decisions that may govern Antarctica in the future.

So far, most analyses of Antarctic politics have taken a descriptive and matter-of-fact approach, while political philosophy has been blind to Antarctica as a case study. In this project, we used these blindspots as a point of departure.

Seminar "60 years of the Antarctic Treaty: Challenges and Questions"

The seminar took place during the winter solstice in Punta Arenas, Chile.

With more than fifty participants, the seminar gathered philosophers, legal scholars, anthropologists, scientists, historians and policy-makers from Chile and Argentina.

Three of the team members were invited to present at this workshop in the Mercator Research Institute on Global Commons and Climate Change, EUREF Campus, Berlin, Germany.

The PPA project participated in the 11th Polar Law Symposium in Tromsø in october 2018.

Three of our project members presented their work-in-progress at the conference.

The project members participated in the SCAR conference "Where the poles come together", which was held in Davos in June 2018.

The project members had an active participation in the biannual conference of the Scientific Committee for Antarctic Research (SCAR) which took place in Davos, Switzerland.

Three out of the six papers presented in this session were from project members:

Mancilla also presented the paper “A Gap in the Antarctic Humanities, and Why It Should Be Filled” at the panel “Polar Research in the Humanities and Social Sciences: Approaches and Challenges”.

The first workshop of the project took place in Oslo from the 4-5th of September 2017.

Both project members and participants from various diciplines and countries gathered in Oslo in the beginning of September to take part in the first workshop of the Political Philosophy looks to Antarctica project.

The second workshop of the project took place in Soria Moria Hotel in Oslo, the 5th and 6th of December 2018.

Both project members and external presenters discussed their work-in-progress on topics related to the project during this two-day retreat.

On Its 60th Birthday, Is the Antarctic Treaty in Good Health?

The workshop took place on the 10th and 11th of October at the University of Oslo.

The workshop Colonialism, Postcolonialism and Antarctica will take place via zoom on the 28th and 29th June, 2021.

Joint workshop from the projects “Political Philosophy Looks to Antarctica” and “Greening the Poles: Science, the Environment, and the Creation of the Modern Arctic and Antarctic”

The first graduate course related to the project took place at the Universidad de Magallanes, Chile, from the 3rd to the 5th of January 2018.

Entitled "The Antarctic Treaty System and Its Challenges", the course was attended by PhD and master students of the Antarctic and Sub-Antarctic Program, as well as by members of the academic staff and of the Chilean Antarctic Institute.