What time are we living in? And with whom do we share this time? What other times are running parallell to ours? How can we synchronize these times? 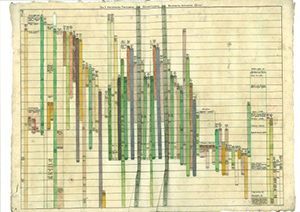 Synchronizing the World: the Making of Modern Progress. In this project we target one of the most enduring myths of the Western world: the myth of progress.

Traditionally, this concept of time is said to emerge in Western Europe in the 18th century. Genres like universal history and the modern encyclopedia display a multitude of times, but they also attempt to bring all these times to move according to the same rhythm – they synchronize them.

In the 19th and 20th centuries this Western synchronized idea of progress is taken up in the ideology of imperialism and colonization and is exported to colonies and contact zones, where the West is confronted with other cultures, with other inherent times.

What happens when the same genres are employed, mostly by local elites, to bring Bengali, Ottoman, and Arab knowledge traditions and concepts in synch with the Western ones – when progress is made global, not just on paper, but in practice?

In interactions between Europe and the Arabic speaking regions, arguments about civilization and progress depended most clearly on linguistic discourse. As was argued by those who seriously engaged with the Arabic language, whether Orientalists or Arabic native intellectuals, reform of the Arabic language was tantamount to social and political progress. In the West, and notably in the work of Ernst Renan, linguistic features were taken as signs of inherent racial limitations in “modern” temporal experiences of time.

On the Levantine side, Arab philologists were fast at work trying to reform their language in order to introduce modern temporal mechanisms, that were activated in the notion of progress and civilization, but also in ideas about innovation, science, and modernity. Remarkably, the Arab intellectuals adopt crucial elements from Western Orientalist discourse, particularly in the methods chosen to bring about the time of progress. By analyzing the function of linguistic methodologies as tools of synchronization, this project examines the shared linguistic logic that overdetermined Arabic in the construction of provincial Arab nations that nevertheless shared a pan-Arab political sentiment.

By examining the linguistic treatises on Arabic from the early years of modernity, especially on the texts by French Orientalists from Silvestre De Sacy to Ernst Renan read comparatively against the Levantine Syro-Lebanese philologists from Nassif al-Yaziji to his son, Ibrahim, this project argues that the methodological synchronicities that took place in philology aligned the temporalities of the different communities and synchronized communities that are governed by relations of imbalance.

The Ottoman Empire was, by the late nineteenth century, represented by Europeans as an incurable ‘sick man of Europe’ and a relic of the past. This was about the same time as progress as a historical concept was translated into Ottoman and became part of Ottoman political debates. Ottomans increasingly made sense of international hierarchies by the use of this concept and through the temporalisation of difference.

Following the establishment of a Turkish Republic in 1923, Turkish nationalists adopted this representation of the Ottoman Empire as a relic of the past and started to distance themselves from an empire they had very much been part of. As is now generally acknowledged, these debates started much earlier in Ottoman, there is an important continuity in the political discourse of the late Ottoman Empire and the early Turkish Republic. Yet, the Turkish Republic distanced itself from the Ottoman Empire through a similar type of othering that the Europeans had employed. This part of the project is about the synchronisation of Ottoman and Turkish historical narratives through the translation of concepts, periodisation devices and genres such as World History from European languages.

Although the project may be seen primarily to fall within the purview of history of science, among its secondary aims, the project seeks to unpack the relevance of the concept of synchronization in understanding futurist projection in disciplines and fields that interface with the natural sciences.

The Re:Enlightenment Exchange 5: Knowledge as a Public Good

ReX5 moved beyond the forms and frameworks and considered the actual work that knowledge performs in the world – how old and new knowledge gives rise to events, actions, innovations, and transformations.

Discussion with participation both from the University of Oslo and from the Re:Enlightenment Project about  how Enlightenment forms and practices moved from the centers, in London, Paris, and Berlin, to the peripheries, and how they changed on the way.

The Re:Enlightment Exchange 5 Oslo is organized in cooperation with the Free Word Foundation and the Norwegian National Library.