This project examines the manuscript culture of the Middle Ages and investigates the modes of modification in the transmission of texts. 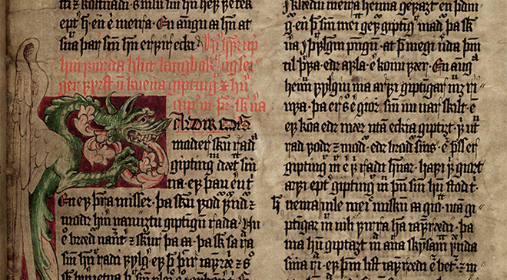 Variance and change is central to this research project. The manuscript culture of the Middle Ages has been characterised as constituted by variance on all levels, from palaeography and ortography to the transmission of motifs and larger textual units. An important contention at the outset of the program is that this variance plays perhaps the most significant role in our understanding of norms and change in the establishing of a literate culture. We therefore intend to carry out investigations of the modes of modification on various levels in the transmission of texts in order to establish a systematic synthesis.

Two central perspectives within the program concern time and space. Within the project we will operate with rather open definitions of both the time period covered by the program and the delimiting of the geographical area, something that may prove challenging but is essential to our approach. As for the time period relevant for the program the preliminary time-frame will be c. 900 to c. 1600, but this period will be transcended in both directions when necessary to achieve the synthesis we wish to establish. Primarily we will study the literate output of the Nordic region, but our perspective must inevitably lead us into European comparison.

Strand 1: Texts in the Open

Strand 2: Texts to Rule and Regulate. Legal and Administrative Texts in the Medieval Manuscript Culture

Strand 4: Texts and the City. The Interplay between Social Space and the Agency of Texts

Strand 5: Texts New and Old. The Dynamics of Texts and Genres in Manuscript Transmission

Strand 6: Text and Agency. The Networks of Textual Transmission and Change

The overall aim of the program is twofold. Our first objective is to form a new synthesis in the view of texts in transmission in the Nordic realm. A second objective is to explore the theoretical and methodological issues further in order to contribute to the debate. We suggest the following hypotheses about central phenomena in the Europeanisation process:

The overall theoretical frame-work of the program is provided by the polysystem theory developed by Itamar Even-Zohar. This notion of networks, primarily by Even-Zohar applied to the role of translations in modern literary traditions, will however need to be adjusted in a number of ways to account for our intended work. In our understanding of the polysystem it will consist of networks not only of works in a literate system.

We are interested in the representations of works in an on-going transmission in manuscript tradition, i.e. the text witnesses of works found in various contexts over time will be treated individually as sources to variation and modes of modification. We intend also to incorporate the material artifacts, that is the manuscripts and other written documents and their representation of the texts, as well as institutions, social groups and individuals.

This expanded system will enable us to connect the modes of modification of the literate culture on a number of levels. In order to control this network of interrelated systems we need to establish nodes, or what we choose to refer to as observation points.

Each of the strands will provide a number of observation points, that is, points in time and space from which it is possible to relate to other points. This will allow us not only to provide a number of individual studies, but rather to connect the six strands to the overall system over time.

The program is funded Riksbankens Jubileumsfond - The Swedish Foundation for Humanities and Social Sciences (rj.se).

Projects we collaborate with