Multilingualism can be an advantage for persons with dementia

A new study suggests that knowing more than one language can help people with dementia to communicate. However, family and healthcare workers have to play their part, according to a Norwegian language professor. 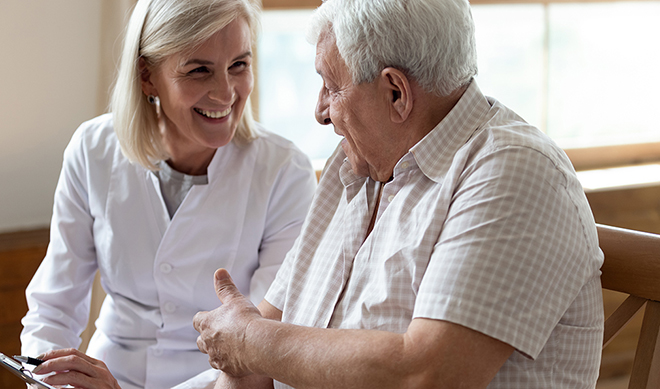 Multilingualism is a resource, at least for people with light to moderate dementia, says language professor at the Centre for Multilingualism across the lifespan. Illustration: Colourbox

The fact that the population of Norway is becoming increasingly multilingual is becoming manifest in retirement homes and assisted living facilities. Labour immigrants who arrived in Norway in the 1960s and 1970s are growing old.

But what happens to the language abilities of multilingual people who are suffering from dementia? As more and more words are lost, is it still possible to be heard, seen and understood?

“Previous research has suggested that multilingualism may be a problem in connection with dementia, because people begin to speak in their native tongue which people around them can’t understand. In a new study, we flip this around: multilingualism is a resource, at least for those with light or moderate dementia,” says Professor Jan Svennevig at the University of Oslo’s Center for Multilingualism in Society across the Lifespan.

Carefully selecting which language to use

Dementia is a set of symptoms which appear in conjunction with various brain diseases and largely impact elderly people. In Norway, around 70,000 people have a form of dementia.

He and his colleagues Pernille Hansen, Anne Marie Landmark and Hanne Gram Simonsen have followed seven individuals with moderate dementia through interviews, recordings of their everyday speech, and language tests. All of them were residents of Norway with Norwegian as their second language. The researchers’ findings support the hypothesis that elderly people have a better recollection of their native language than their second language.

However, the researchers also made another discovery: all seven displayed an ability to understand which words they could use to make their conversational partner understand them. Only on rare occasions did they use words from their mother tongue, such as Finnish, Japanese or Urdu. All of them knew English, and they employed English words far more often when they did not recall a word in Norwegian.

One of the conversations between Norwegian-Japanese “Koki” (85) and a home nurse was about a tube of adhesive for dental prostheses (in Norwegian):

“What we see here is that the person’s awareness of which language may be available for their conversation partner is still intact”, says Svennevig.

“In this case, utilizing words from another language is not a sign of illness, but rather a resource.”

When other scientists have previously found that people with dementia easily turn to their mother tongue in conversation with others, it may be related to how serious the dementia is, according to the professor.

“It is possible that a person begins to insert words from their mother tongue only when they are suffering from an advanced stage of dementia.

Multilingual people, many of them migrants, are familiar with navigating in multilingual landscapes. According to Svennevig, these life experiences not only enrich people’s language skills:

“It may also strengthen a function in the brain known as the ‘control function’, which regulates the ability to determine which language might be used at which times.”

Much still remains unknown about dementia and multilingualism. Some scientists believe switching between languages throughout one’s lifetime may in itself be a kind of “vaccine” against dementia – not by preventing the disease in itself, but by delaying the onset of symptoms.

Others, however, believe it’s not the switching between languages in itself, but rather the experience of living in different societies, that may make the brain more resilient.

The project scientists cannot say which is correct. However, in a different study they observed that words that have similar traits across different languages, known as ‘cognates’, are often more easily recalled. One example is the Norwegian “sykkel” and the English “bicycle”. In this case, multilingualism seems to have a direct effect on the ability to recall words.

“It is common to forget words that one rarely uses. Other words are not so easily forgotten, because they have certain similarities. These are often loan words, where the storage process for the two words mutually strengthen each other”, says Svennevig.

He believes these patients’ conversation partners, be they healthcare personnel or family should consider the different possibilities for communicating with people with dementia. Retirement homes could benefit from documenting the language skills of their staff and residents, says Svennevig.

“English may be one potential language that could be used. However, many retirement homes also have employees who are familiar with other languages. They may have limited knowledge of it, but it often doesn’t take much to make a big difference.”

“In cases where the elderly person has lost much of their ability to speak Norwegian, you could also learn some words and phrases in the person’s native tongue”, he suggests. He believes the potential benefits far outweigh the potential confusion.

“Some end up in a situation where they lose practically all their Norwegian spoken language skills. That means you have a very serious communication problem, and you are dependent on the people around you using any available option.

In the dialogue quoted above, the Japanese-born 85-year old uses the English word “pink”. The carer then repeats that word.

Svennevig says this is a good example to follow.

“Rather than correcting Koki, the carer demonstrates that this is an acceptable way to talk.”

He encourages people to keep in mind how communication is about expressing meaning.

“This can be done in so many ways. You can alternate between languages, or use gestures. The participants in our study were also adept at explaining things by different means, or they would appeal to their conversation partner to help them.”

In such cases, the conversation partner should actively assist them.

“Communication is not something you do by yourself – it's a collaborative effort between people.”