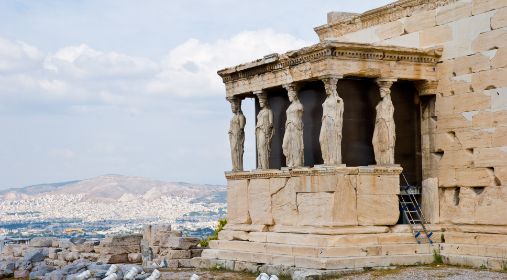 Eyjólfur Kjalar Emilsson founded the society in 1996 and the group was further strengthened when Øyvind Rabbås and Panagiotis Dimas started working at UiO shortly afterwards. The Oslo Happiness Project (OHP), which was ongoing for several years in the early 2000s, grew out of and temporarily replaced the Society for Ancient Philosophy.

The group was evaluated by a committee of experts on behalf of the Norwegian Research Council in 2015 (HUMEVAL), received a very high score, and was as a result given a considerable grant for the period 2018-2022. This funding is important for the present research-related activities in the group: workshops, conferences, and receiving visiting scholars. We are currently somewhat in between major projects, but it is our firm ambition to continue to apply for funding for such projects, and eventually also to apply again to become a Centre of Excellence.

The overall goal of the group is to produce international top-level research in ancient philosophy broadly construed: from the Pre-Socratics, through the classical and Hellenistic periods down to early Christianity.

We aim to reach this overall goal in several ways: by a high output of publications, both monographs and edited collections on top-level publishers, and articles in well-established journals; by organizing conferences and inviting international speakers, as well as ourselves participating in conferences and giving talks abroad; and by recruiting and educating students at all levels to become accomplished in ancient philosophy.

The group has at various times had formalized contact with a number of prominent scholars. Since we are presently between projects, there are currently no formalized collaborations with external scholars or institutions.

The most important joint research project so far has been concerned with the tradition of eudaemonist ethics. This was inaugurated with the Oslo Happiness Project and culminated in a year of residency at the Centre for Advanced Study in Oslo in 2009–10. The joint project resulted in an anthology from Oxford University Press in 2015, a special issue in Symbolae Osloenses and several other individual publications. There was a large contingent of international participation in this project, including Julia Annas, Katerina Ierodiakonou, and Gabriel and Jonathan Lear.

Another project was “The History of Philosophy and History of Ideas 600BC–1800AD: Research training”. This was primarily a collaboration between UiO, UiT and UiB. Under this project, there were conferences, seminars, and Ph.D. courses, all aimed at training young researchers. The main goal was to broaden and improve the quality of Ph.D. training in the history of philosophy in Norway. There was, however, also considerable participation from other Nordic countries in these events.

The Oslo Ancient Philosophy Conferences workshops, which have been taking place every fall since 2014, has been highly successful in the recruitment and training of students and collaborators. The renowned ”Symposium Aristotelicum” holds its meeting in 2020 in Oslo. The symposium brings together leading researchers for a close reading of an Aristotelian text. The commentaries are published by Oxford University Press.

Our success regarding recruitment was vastly improved by the establishment of a specific programme option in ancient philosophy at the MA-level within the philosophy program at UiO in 2016. We wish to attract both Norwegian and international students.