Many feel invaded by digital technology and social media. Some take control, and disconnect. 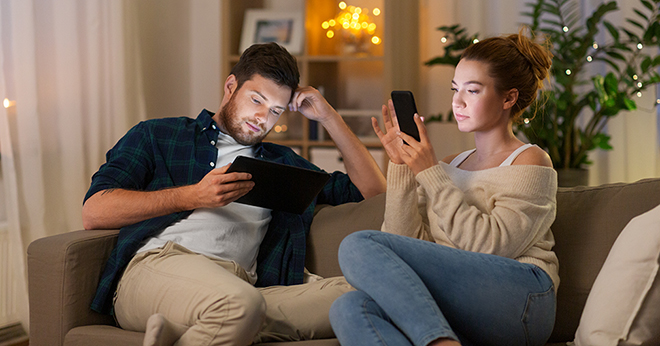 Expectations about intense conversations until late in the evening are shattered when a mobile phone catches everyone’s attention. Illustration: Colorbox

You wonder what time it is. Pick up the phone to check. Tap into the Facebook app. Into the weather app. Into your favourite news source. Into Pinterest. Facebook again. Twitter. Back again to Facebook. Twenty minutes later you catch yourself, and put your phone away. You’ve forgotten both what time it is and what you wanted to check.

You've probably been there. For many people, it is rather uncomfortable to be a prisoner of the phone. Some just take control and switch off. They try what the Norwegian media researcher Trine Syvertsen calls a digital detox.

“The term digital detox was first used in 2010”, Syvertsen says. She is Professor of Media Studies at the University of Oslo.

“Over the past decade, the term has been used more frequently, parallel to increased public and private digitisation”.

Disconnect, according to Syvertsen, is a response to the fact that digital media now occupy an increasingly large portion of our lives. According to a survey by the Kantar analysis agency, half of the population think they spend too much time on mobile phones and the Internet.

“It has become normal to feel overwhelmed. Looking back at media history this is nothing new, both the telegraph and later on television were overwhelming at first. The major difference is that now you are almost always connected”, she says.

In the Digitox research project, Trine Syvertsen and her colleagues study how we, both as individuals and as a society, understand and deal with increasingly invasive media technologies.

The project is in its early stages, but after pilot studies, interviews and a review of previous research, researchers are beginning to form certain clear hypotheses. One is that individuals who want to disconnect from digital media can be divided into two groups.

“One group is basically not interested in being disconnected from digital media, but still tries to control the time they spend online.

They may be professionals who are tired of being distracted from their duties, or people who are fed up with their mobiles and choose to go to summer camps where their phone has to be left at the entrance.

The other group are people who have a clear desire to reduce the time they spend on digital media and their phones.

“They talk about being disconnected for a week, a month, or a year. This may involve deleting social media such as Facebook, limiting their Internet access or stopping checking news online”.

“Let’s say, for example, that you're out in the great outdoors. You want to be present, but then you want pick up your phone to take a photo because you’re on a mountain peak. Next thing you know you get distracted by something on your phone and start looking at other people's photos instead of looking at nature. You stop being present, lose your concentration, and get right up close to someone else's private life.

Caught up in the “checking track”

Many get caught up in media usage when they pick up the phone and click through some regular apps and websites, what Syvertsen calls the “checking track”.

“Several people describe such a track. For most people it is news and weather apps, Facebook, Tinder, or something similar. The checking track is associated with pleasure, which is why we do it. But it is designed so that you will not be able to get out again.

This is where frustration comes in.

“It's fun for five minutes, but after an hour they're back on the weather app, and the weekend weather hasn’t got any better,” Syvertsen says.

“Statistics show that many turn off sound and messages. Just a few years ago, you could hear ringing noises everywhere, but this is no longer the case. But once you've let yourself be drawn towards the phone, you'll see the messages that pull you back to stay. These days people seek out the interruptions, which becomes a frustrating waste of time in and of itself.

“Our impression is that people feel they have a limited possibility to influence the industry or the people around them. “The only things they can influence are themselves and their own consumption”, says Syvertsen.

She believes we are moving in the direction of less criticism of the media, and more self-criticism:

“There is a lot of shame involved in this. We live in a society of abundance, which requires self-restriction.”

At the same time, digital development and media technology exert strong pressure on people, and it is not reasonable that users should bear all the shame, Syvertsen believes

“But when the industry itself should show responsibility, they do it by asking people to take responsibility themselves,” she says.

The relationship between people and media technology is full of dilemmas. The project looks specifically at how this manifests in the Nordic countries.

“The Nordic media ideal is double: You should participate in democracy, follow the news and have high digital competence. At the same time, the ideal is a real and authentic life, which is spent in remote cabins without a shower or electricity, or out in the great outdoors.”

This represents an interesting conflict, she believes.

“We are happy to go to the cabin and expect to play board games and chat together until late in the evening, and many are disappointed when the modern screen usage strikes and everyone sits in their corner of the sofa with a phone. Few people associate Facebook with a cosy and sociable stay in a cabin, but it's obvious that people enjoy themselves with Facebook.”

The Digitox project explores precisely how people deal with the conflicts and dilemmas related to Internet use. According to Syvertsen, this says a lot about the values that are at stake. In the same way as choosing to refrain from flying or eating meat, opting out of mobile use can be an expression of doubt in greater questions.

“Talking about digital disconnection or connection is, in the same way as other media use, an opportunity to talk about absolutely anything else. What is the good life, what makes a good person, what is valuable, what is real and what is fake?”

Trine Syvertsen is Professor at the Department of Media and Communication at the University of Oslo She leads the research project Invasive media, ambivalent users and Digital Detox (Digitox).

Among other things, the research project examines: