Sami people in the Nordic countries do not enjoy the same opportunities to influence the political agenda as the majority population. 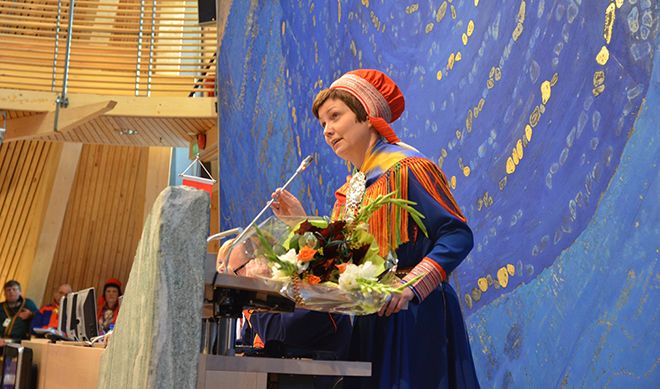 When Aili Keskitalo, President of the Sami Parliament in Norway, address the Sami Parliament, the premise of her political impact differs from that of other Norwegian politicians, new research from the Department of Media and Communications at UiO concludes.

“When you zoom in on a group, you discover how opportunities for political communication differ for minorities when compared with the majority population.”

This is maintained by Eli Skogerbø, professor of media studies at the University of Oslo. She is one of the editors of the new book Power, communication, and politics in the Nordic countries. In one of the chapters, she and her colleague, Eva Josefsen of the University of Tromsø, examine the opportunities that indigenous people, particularly the Sami people in Norway and Sweden, have for communicating politically.

“Although the Sami are one people, the political systems of the Sami communities are different. The fact that the people and land areas they have traditionally lived in are divided between four different states has major consequences in terms of the Samis’ political impact,” Skogerbø says.

One ethnic people, divided by borders

Samis live throughout the Nordic countries. Sápmi encompasses the traditional Sami land area that stretches across major portions of Norway, Sweden, Finland and Russia. It is estimated that some 40,000 to 60,000 Samis live in Norway, 20,000 to 40,000 in Sweden, about 7,000 in Finland and 2,000 in Russia. The fact that the Sami people live across international borders is significant.

“Currently, the corona pandemic prevents people from crossing the borders to visit family and friends as they normally do. If we take a historical perspective, demarcation has entailed population transfer and infringement of rights,” she says.

State borders of also provide the framework for politics and the media.

“Four countries have divided the Sami settlement area, which means that one ethnic people has been subjected to four different authorities and legislators. This is complicated, and the Sami parliaments basically have influence only within the borders of the nation state in which they live.”

According to Skogerbø, there is often a lack of interest and knowledge, in both Norway and Sweden, about Sami affairs, and this sometimes makes it difficult to have an impact in terms of Sami politics.

“The Sami parliament is an advisory body, not a law making authority. Samis have the right to vote in parliamentary elections like everyone else, but they have an unequal proportion of power.”

The media scholar notes that Sami interests frequently conflict with commercial interests. One recent example is the ongoing conflict over construction of the wind power park in Fosen in Trøndelag.

“This is a major issue, but the national media seldom give it much coverage,” Skogerbø says.

The Sami Parliament - a result of the Alta Controversy

Norway and Sweden share much in common when it comes to politics and the media. To explain the differences between the Samis in these neighbouring countries, the researchers look to history.

“In Norway, the Alta controversy was a game changer,” Skogerbø says.

“The Samis were mobilised long before the conflict about the damming of the Alta-Kautokeino-river escalated in the 1970s, but it did stimulate Norwegian debate and created alliances to help confront the challenges facing the Samis.”

Even though the Alta controversy failed, it laid the foundation towards the end of the 1980s for constitutional change and new legislation relating to Sami rights, and it led to the establishment of the Sami Parliament which was inaugurated in 1989.

The other Nordic countries have not had any equivalent controversies that have mobilised opinion on a national level. In Sweden, the historical distinction made by the Swedish government several centuries ago between reindeer-herding Samis and all other Samis has been important all the way up until today.

Marginalised in both Norway and Sweden, but in different ways

The Sami Parliament is the most important political institution for the Sami people in Norway. Nearly 12,000 Samis vote in the Sami parliamentary election each year, and the elected representatives promote Sami issues for consideration by the Norwegian Parliament and the Government.

Sami political parties and organisations, along with other parties, submit lists of candidates for the Sami parliamentary election in Norway. The largest organisation is Norske samers riksforbund (NSR) [Norwegian Saami Association], which has the incumbent president of the Sami Parliament, Aili Keskitalo. Among the “Norwegian” political parties, the Labour Party is the largest, and it submits candidate lists in all constituencies.

“This means that they must have a Sami-specific political programme,” Skogerbø points out.

“They are both a representative organ and a body that executes Swedish policy. In addition, the reindeer-herding Sami also have power and influence through channels outside the Sami parliament,” Skogerbø explains, underscoring that it is not clear-cut which system - the Swedish or the Norwegian - functions "best".

“Research shows that Sami parties and voters in Sweden are satisfied with the current situation,” she says.

More platforms for Sami votes than ever before

The media’s coverage of politics also differs across international borders. In Norway, NRK has a Sápmi editorial staff of more than 100 employees, and press subsidies are granted to two Sami daily newspapers in addition to some smaller media outlets. In Sweden, there are fewer Sami-language media, and the Swedish Sápmi editorial staff, which is a collaboration between SVT and SR, has fewer employees.

“Public service broadcasting companies are the most important media in both countries. They broadcast in several languages and reach out to everyone,” Skogerbø says.

“The notion of language as a bearer of culture has been traditionally very strong in Norway, and it is important to use Sami language in news reporting. The multiple platforms today enable multi-lingual broadcasting. Because so many Samis have lost their language, and most Norwegians do not understand them, it is also important to broadcast in both Sami and Norwegian.”

Both in Norway and across international borders, the number of media available is larger than ever before. This is due to the development of digital media and a governmental policy that supports minority media. But even though Sami media have acquired more space, Skogerbø points out that this does not necessarily mean more space for Sami affairs in the Norwegian news.

Political communication is more than journalism

“There are a number of Internet-based media; people communicate via social media, and music, film and literature today involve a significant amount of political communication. Contest programmes such as Stjernekamp and the Eurovision Song Contest are good examples of this up through the years,” she says.

Major films such as Pathfinder (1987) and The Kautokeino Rebellion (2008), both directed by Nils Gaup, have helped to highlight Sami history and identity. In 2016, the film Sami Blood, directed by Amanda Kernel, situated its story in the Swedish side of Sápmi, grappled with racial biology and language suppression, and became an international success.

“And today, musician Sofia Jannok is a distinct political voice on issues concerning rights to land and water. In the same manner as Mari Boine, Jannok imparts a way of looking at the world from an indigenous perspective.”

Skogerbø has studied political communication for many years and is convinced that it is important to raise the status and opportunities of minorities.

“Samis and other indigenous people and minorities are a part of the Nordic culture and society. The Nordic states are far from monocultural today and have never been so in the past. Many different languages have been spoken here, and we also have a colonial heritage that we need to talk about.”

“What is most important: Providing good access to media for the Sami people, or putting Sami issues on the national agenda?’

“Both are important, and neither can be done without doing the other. A media infrastructure that enables people to speak with one another and exchange views on important topics is a prerequisite for issues to reach the national agenda. Even though it is a difficult step to take.”