Popular MA programme: Students go behind the screen and delve into the culture

We live much of our lives on screen. The master’s students studying Screen Cultures stop and think about what this means. 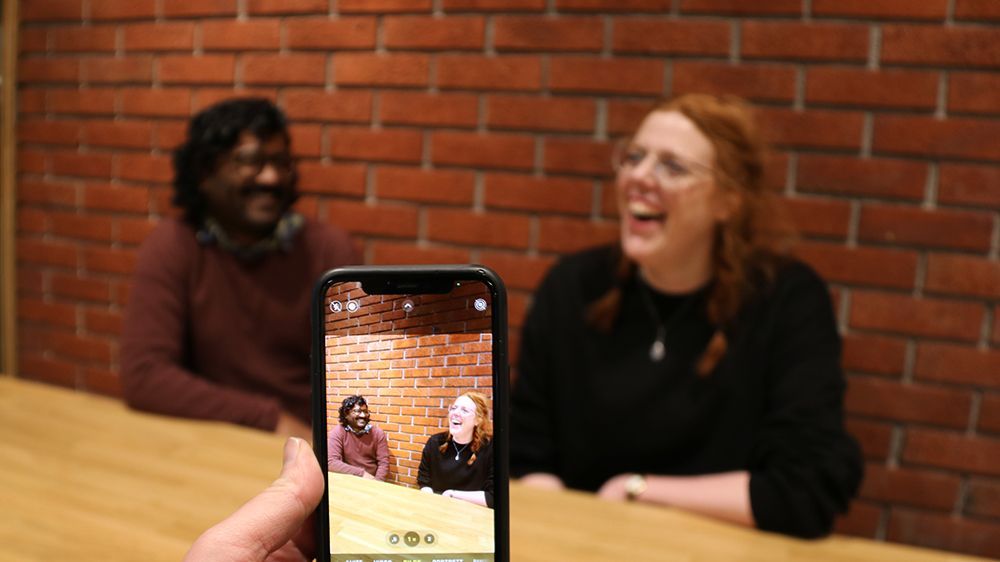 Rajeev Sharma Busgeeth and Hanna Marie Nicholas have specialized in how the many screens we surround ourselves with matter to society and culture.

In the spring of 2021, the initial class to study Screen Cultures graduated. They left behind them a daily routine in which screen life had taken over from classic student life during the pandemic.

“Screens really are everywhere, and this programme is very much about the people in front and behind,” says Hanna Marie Nicholas.

She is one of the students who finished their master’s thesis sitting at home by the kitchen table.

“The staff who run this programme of study are an incredibly engaged group who want to cultivate the interests of the students,” Nicholas continues.

Not just for media students

The master’s programme Screen Cultures  doesn’t really need any promotion. In 2020 there were nearly nine applicants for each place on the programme of study. The students come from studies in literature, culture, anthropology and media. Some also have backgrounds in the natural sciences.

“This should not just be a programme for media students. We want to involve cultural and humanistic approaches to today’s screen culture”, says Steffen Krüger.

He is a Senior Lecturer at the Department of Media and Communication (IMK) and teaches in the MA programme.

“I really look forward to these lectures, not only because I am going to be teaching the students, but also because I know that I will learn something from them”, says Krüger.

The Screen Cultures students will learn to examine everyday screen use and screen culture in a conscious, reflective and to some extent critical manner. Krüger believes that this type of expertise is useful in a variety of jobs.

“We educate students who are going into media-based professions, but also students who will enter into other parts of the cultural sector. They become critical thinkers who will be able to influence these areas in a responsible manner.”

Of course, he can’t stop students who want to develop addictive technology, he adds.

“But at least they will learn to be aware of cultural and political consequences.”

Hanna Marie Nicholas wrote her master’s thesis on digital shaming, i.e. videos that shame people and get published online. This has really gained momentum in the US during the Covid-19 pandemic. Pretty much anyone can be filmed doing something stupid at the supermarket checkout counter.

Nicholas investigated what it is that characterises such videos and how they are promoted by social media. She also looked at the consequences.

“I can watch videos like this myself and think that the person’s behaviour is not acceptable. But I don’t know anything about what happened beforehand, I only know what I am being told. The videos often contain the full name of the person being shamed, and they can get 10 million hits. They are never deleted.”

The MA programme in Screen Cultures has 20 available spots and you can apply every year.

Nicholas’ fellow student Rajeev Sharma Busgeeth Enjoyed the fact that you both learn the technical aspects of the screens, but also ethical issues related to them.

“One  example is concerned with political elections: Should political parties be allowed to place ads on Facebook? Is this justifiable in a democracy? The programme enabled us to reflect on these types of questions.”

Busgeeth wrote his master’s thesis on the image created of the artist Edvard Munch on Instagram.

“There is a different Munch on Instagram to the one found in the museum.

If someone wants to post something and tag it with #Munch, no one can stop them.”

Screen Cultures students have four mandatory courses. The first course deals with screen history and goes all the way back to the Renaissance, with optical toys and camera obscura, the predecessor of the camera.

The second provides an introduction to screen technology. The third deals with screen production and aesthetics, while the fourth focuses on the political dimensions of screen use.

There is also a programme for bachelor students: They can take a project course in screen cultures where they specialise in a topic of their own choice.

“We think it is important that the students are invited to work on what they are interested in. We then try to give these interests more direction and place them into academic traditions,” says Steffen Krüger.

It is all about the people

Instead of more traditional examinations in the various courses, students write term assignments and portfolio assignments.

“It was fun because we got to delve into so many different things,” says Hanna Marie Nicholas.

She has found that the programme really has opened some doors for her. While studying, she became a research assistant at the Department of Media and Communication, and she is about to start a research officer position at another department.

“Perhaps the most important thing I will take with me is that screens involve a lot more than what I thought when I first started.  I think knowledge about screen culture will be very useful in the future.”