We are a research library that manages the collection and knowledge about Henrik Ibsen, and makes it available for in-house as well as external research. The library is open to everyone.

Everyone is welcome to visit us and use our library to read books and articles or watch a movie. Unfortunately, we do not provide the option of borrowing material home.

We have two computer work stations where you can for example search our collection. The library has a copying machine available for students and employees at UiO, and scanning and printing is also possible.

Access library resources when you are not on campus.

For help and guidance, feel free to contact our subject librarian Kristin Kosberg by e-mail.

About the library collection

The physical collection counts about 1800 books by and about Ibsen and his works. In the library you will also find magazines, a large film collection, theater programs and a unique collection of articles. In addition, the library gives you access to electronical books, articles, audio and images. You also have access to good quality digital dictionaries.

The collection includes the major Norwegian editions (e.g. Henrik Ibsen's Writings) and the most comprehensive collections of works in German, French and English. We also have translations of individual works into many languages in addition to film adaptations and performance recordings for use in teaching.

Some Scandinavian and English theater and literature journals related to Ibsen Studies are available here, and a good collection containing drama theory and history, literature theory and history, handbooks, dictionaries in many languages, encyclopedias etc. The collection also contains over 15,000 physical articles about Ibsen's life and works. You can look up the articles in The International Ibsen Bibliography, where you will also find the shelf signature. All articles registered after 2015 you can look up also in Oria. Many articles are electronically available.

How to perform a search in Oria

New books in the Library

Do you have a favorite that you'd like to share? If you think something is missing in our collection, you can suggest a purchase (books, journals, films, databases, e-books etc). 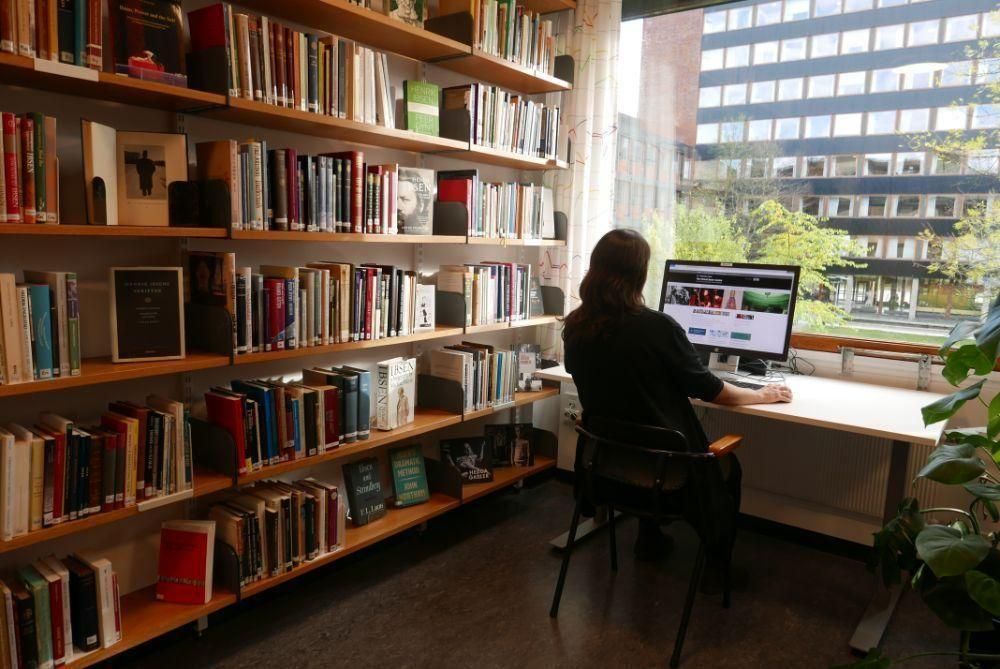 Þ = Access only from campus or from home with swipe login (your UiO username and password). Feel free to ask the librarian for an introduction and help with searching the databases.

Bibliography of the Swedish History of Literature

Access to digitalised film material. The portal is a collaboration between filmarchives, the libraries and cinemas across the whole of Europe. The National Library of Norway is responsible for EFG in Norway.

Access to high-resolution images of artwork in a number of museums around the world. You can also move around the museums with Google Street View technology. It can be limited to the categories Artists, Mediums, Art movements, Historical events, Historical figures, and Places

Search the Norwegian originals of 26 of Ibsen's plays and a collection of poems, a total of 630,00 words. Or scroll through the list of words and obtain some statistics of the most frequent words and word classes. (Norwegian)

The writings of Henrik Ibsen (e-edition)

Search for all known performances of Ibsen's plays. Updated by the Centre for Ibsen Studies.

More than 2000 full-text journals, of which about 230 are in the arts and architecture. Interdisciplinary, and good at Performing Arts

A free search platform of Media History Digital Library featuring millions of pages of books and magazines from the histories of film, broadcasting, and recorded sound. The platform is led by Eric Hoyt and the Wisconsin Center for Film and Theater Research.

A database containing references to research on literature published primary in Norway, including books, theses, and articles from books and journals. Operated by the National Library of Norway

A classified listing and subject index of scholarly books and articles on modern languages, literature, folklore, and linguistics. Operated by the Modern Language Association of America

Log in with Feide to get access to digitized material as if you were at the Norwegian National Library. Search in books, newspapers, and magazines. (Norwegian)

An index for Norwegian and Nordic journal articles. Updated by the National Library of Norway. (Norwegian)

Formerly called "Beyerbasen". A bibliography of literary criticism published in Norwegian media and some reviews of Norwegian literature published in foreign media. (Norwegian)

The New York Public Library has scanned more than 840,000 high-resolution images that can be used legally. The database is updated daily with new material, including prints, photographs, maps, posters, menus, illustrations, catalogs etc.

Search for performances, singers and opera houses in Europe.

Access to all issues of the American theater magazine PLAYBILL. Search the largest BROADWAY database online

An index of more than 395 journal titles – over 160 of which are available in full text – including American Theatre, Dance Chronicle, Dance Teacher, Theatre Journal, Theatre Survey, Opera News and more

The service allows you to read over 7,400 daily newspapers and magazines from large parts of the world

Interdisciplinary base with Humanities journals

A digital archive of theater in Denmark from the 2009/2010 season. Find information about productions, performances, and theatrical activities

The Ibsen Society of America

International bibliography with references to documents of and about Henrik Ibsen (books, journal chapters, theatre programs, films and more). Search among 37.000 items. You can also take a look at a separate list of terms for topics (Norwegian terms only) and a separate list of terms for genres (Norwegian terms with English translation) used in the Ibsen Bibliography. Professionally responsible for the bibliography is the Center for Ibsen Studies

The works of Henrik Ibsen in the original Norwegian, presented side by side with translations into various languages.

The Ibsen Center's web portal with links to several databases and digital resources that are operated/developed/expanded by us (incl. The International Ibsen Bibliography, The Ibsen Archive, Henrik Ibsen's Writings, IbsenStage and The Multilingual Ibsen)