Monika Schmid, Professor of Linguistics, is critical of European authorities’ use of language analyses to determine the place of origin of asylum seekers. She claims that it is impossible to determine a person’s origin by analysing his or her language. 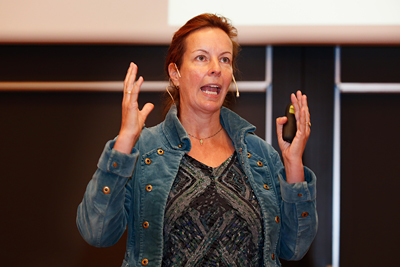 Professor of Linguistics Monika Schmid is critical of the practice of language analysis of asylum seekers. (Photo: Terje Heiestad, Millimeterpress)

“The practice of using language tests to determine a person’s place of origin is fraught with a number of linguistic, practical and legal pitfalls,” Professor Monika Schmid claimed in her lecture during the Einar Haugen Lecture Series, which was arranged by MultiLing, the Center for Multilingualism in Society across the Lifespan at the University of Oslo. Monika Schmid is a professor at the University of Essex as well as the University of Groningen. The title of the lecture she gave on the European Day of Languages, 26 September was: When your language is your only passport: Language as an indicator of origin for asylum seekers.

A number of European countries use so-called LADO tests, Language Analysis for the Determination of Origin, as a key element on which to base decisions related to the processing of asylum applications.

The tests are used when the identity and place of origin of an asylum seeker are called into question in the absence of other identification such as a passport or a birth certificate. As a rule, a LADO test is undertaken as an interview with the asylum seeker by a representative of the immigration authorities, often with the aid of an interpreter. In cases when the interviewer cannot speak the applicant’s mother tongue, the interview is conducted in another language. According to Monika Schmid, interviews also frequently take place over the phone.

A sample of words and sentences

The asylum applicant is asked questions about the country’s currency, national holidays, food and customs. The interview is recorded and subsequently analysed by a language expert or linguist. The language analysis is based on three to five words to test pronunciation, a few test words to confirm the person’s geographical origin and some phrases to review the person’s use of grammar. In total, a report amounts to two or three pages. According to Monika Schmid, the language analyst often permits him or herself to volunteer some personal assessments of the applicant’s credibility. The language analyst’s identity is secret, as is his or her academic background.

“People who leave their country of origin after the onset of puberty cannot conclusively prove their origin by way of their language. After a period abroad, their language changes. Even though children may leave with their parents who speak their mother tongue, they may not acquire their parents’ language. Children who emigrate alone nearly invariably lose their first mother tongue,” she explains.

When these tests were initially introduced in the UK in 2003, they were met with severe criticism, and many strongly doubted their validity. Among others, the House of Lords is reported to have been highly critical, stating that the tests had more in common with party games than with forensic science. The British refugee service stated that they would be gravely concerned if the authorities were to use these tests as a key element on which to base decision-making in asylum matters. This notwithstanding, the tests have been introduced in a large number of countries.

One of the fundamental assumptions underlying the use of these tests is that if a person has spent the first part of his or her life in a specific area, that person can be expected to speak at least one of the language varieties that are common in that area.

In her lecture, Monika Schmid referred to research in support of the claim that this is not always the case.

The majority of asylum seekers who come to Europe today hail from countries such as Eritrea, Somalia, Sudan and Afghanistan, countries that have a wide variety of languages and dialects. Each applicant will most often speak several of these varieties, either because he or she comes from a multilingual area or because he or she has moved between various language areas.

Trauma can erase the mother tongue

Research undertaken by Monika Schmid as well as others shows, for example, that a person’s attitude to his or her own mother tongue has a significant influence on the ability to preserve the language over time if he or she no longer lives in the home country. For example, during the work on her PhD thesis she saw that German Jews who left Germany and moved to English-speaking countries when Hitler first came to power tended to preserve their mother tongue to a greater degree than Jews who emigrated after the “Night of Broken Glass” when the Nazi persecution of the Jews intensified. Traumatic experiences in the home country may have influenced their relationship to the mother tongue. Schmid also referred to research showing that adults who had been adopted to France from Korea at the age of three to nine years had no trace of their former mother tongue, despite having been adopted when they were relatively older. In adulthood , the adopted children were unable to recognize even the simplest words in Korean. There are also numerous examples of people who have completely forgotten their mother tongue after some years in another country because of shock or trauma.

The people most in need of protection are often the least able to prove their origin by means of their language.

Schmid is also concerned that the setting in which the LADO interviews are conducted is unsuitable for determining a person’s mother tongue or dialect.

“For some, this is the first time they speak on the telephone. The encounter with a public official in a formal setting in an office will also have an effect on a person’s way of speaking. It is completely normal to try to adapt one’s language to the interlocutor. In particular, it will be normal to attempt to shed one’s more “rural” language or dialect in an encounter with people in authority,” she explains.

A language test is not enough

Thousands of such tests are nevertheless undertaken each year. The results from the tests will often have a decisive influence on whether an application is granted. Monika Schmid states that there are numerous examples of young asylum seekers who have had their applications rejected on the basis of very scanty evidence, and often on the basis of the language test alone. These young people have been on the run from their home countries for many years, often without their parents, and have lost their mother tongue and thus the opportunity to prove from what place they initially fled.

Ever since the first tests were introduced, language experts and linguists have attempted to demonstrate their failings. There is no available research providing evidence that such a test can in fact identify a person’s place of origin.

“In some cases, language analyses may be useful as a supplement to other types of assessments that are done with regard to a person’s identity. However, they should never be used in isolation. Experience from the LADO tests demonstrates the necessity of undertaking research on their use. We need to find out more about the purposes for which these tests are suitable and how they can be improved,” Monika Schmid concludes.