An experimental psycholinguistics study on the mental representation of grammar in bilingual individuals. 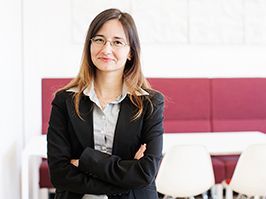 This experimental study aims to investigate the mental representation of the two languages of bilingual individuals. It addresses the following questions:

In order to answer these research questions, the psycholinguistic paradigm called “structural priming” will be employed. “Structural priming” (Bock, 1986; Pickering and Ferreira, 2008 among others) refers to the facilitating effect of having already activated a certain structure on its subsequent processing. The logic is that if a grammatical form is prone to such facilitation, then it must be mentally represented at some level (Pickering and Ferreira, 2008).

In the present study, a “cross-linguistic structural priming” (e.g. Loebell and Bock, 2003; Hartsuiker, Pickering and Veltkamp, 2004) task will be administered. Bilinguals will first hear and repeat an active or a passive prime sentence in one language. Then, they will immediately be asked to describe a semantically unrelated transitive picture with a sentence in the other language. If they tend to describe the target picture with more passives following passive primes and with more actives following active primes, then this will indicate a cross-linguistic priming effect, suggesting that the passives in the two languages are represented in connection to each other.

Crucially, this study compares two groups of bilinguals speaking two different language pairs: Norwegian-Turkish and Norwegian-English. Whereas the passives in the former language pair are structurally very different from one another, those in the latter are relatively more similar to each other. The comparison of cross-linguistic priming of passives in these two bilingual groups will thus reveal whether structural similarity (especially the similarity of word order) of the two languages is a prerequisite for cross-linguistic priming and shared representation of grammatical forms.

The academic supervisor of this project is Hanne Gram Simonsen.

This is a one-year post-doctoral project funded by the Scientific and Technological Council of Turkey (TÜBİTAK).