Medieval studies is an interdisciplinary field of research dedicated to the history, cultures, languages, literatures, thought, faith, and art of the Middle Ages. 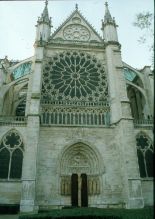 The medieval church of St. Denis

Medieval Studies at the Faculty of Humanities

Medieval studies are conducted in the majority of academic departments at the Faculty of Humanities:

Medievalists at the Faculty of Humanities are not organised formally, but they regularly meet and collaborate in various academic tasks across departmental borders, especially in three fields:

Two-year MA programme in Viking and Medieval Studies, offered in English at the Dept. of Linguistics and Scandinavian Studies in collaboration with the Dept. of Archeology, Conservation, and History.

The Sophus Bugge annual lecture is established through the collaboration of medievalists in ILN, IAKH, IFIKK, and the Norwegian School of Theology. The honor to present this annual lecture is given to leading international scholars in medieval studies.

All medievalists at HF