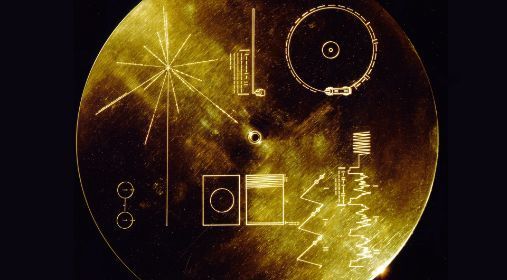 The Voyager Golden Record from 1977.

Lifetimes: A Natural History of the Present proceeds from one main research question: How are scales of time and scales of life entangled in human societies? How and under what circumstances do they come together to form new temporal arrangements and how do these arrangements change?

This project seeks to investigate these entanglements and temporal arrangements through recent global history, in the four lifetimes orders of bio-, geo-, cosmo-, and quantum-.

This project sets out to develop an alternative view of the temporal order of global society, in which the linear, homogenous times of modernization is challenged by a multiplicity of rhythms, speeds, and durations, in various historical and geographical contexts, emerging from lives unfolding on and in the planet, as well as in the universe. Humans as political actors and humans as geological agents exist within different scales of time as well as different scales of life.

But in the everyday these scales become entangled and give rise to singular temporal arrangements, or regimes, which govern decisions and actions.

The primary objective of this project is to show how “lifetimes” form through the entanglement and synchronization of different time scales and life scales, and how they change our experiences, our practices and our orders of knowledge.

More specifically, we want to investigate how biological, geological, and cosmological time scales combine with social and political concepts to form temporal arrangements governing human life, and how these arrangements converge and come in conflict with each other.

The project places itself at the forefront of an on-going reorientation of humanities and social sciences, moving beyond the long-standing emphasis on language and representation as well as the protracted “spatial turn” to a re-examintation of time and temporality – “a new metaphysics of time”, as the editor, Ethan Kleinberg, called it, in his introduction to the first virtual issue of History and Theory (2012).

Rather than embracing this metaphysics, however, this project sets out to explore the various empirical and historical manifestations, as well as the materialities, of temporal experience, assembled to chronologies or temporal arrangements.

These temporal arrangements are identified and described according to their emergence, transformations and effects in the fields of health and medicine, engineering and resource management, and politics and government.

Furthermore, we investigate the history of organizing and classifying scales of time and scales of life, turning them into representations and narratives, in the genres and discourses of natural history, heritage, and future histories, in which temporal arrangements are represented as belonging to the present, the past, and the future, respectively.

Finally, we look at the new concepts of time and time scales in the field indicated by the short-hand “the quantum” emerging from advances in quantum theory.

The Project is divided into seven subprojects.

This first WP deals primarily with the historical and theoretical framework, in other words, with the preconditions for writing a natural history of the present.

WP2 studies the emergence and deployment of temporal arrangements in the field of health and medicine. The first part of WP2 will explore the transformations of bacteria and bacterial ecologies during the 20th century as temporal and spatial events, that is, as biological, historical and cultural processes. The second part of WP2 will follow the emergence of gerontology as a practice designed to synchronize lifetimes and historical times, or more precisely, microbiotic times with the modern dream of progress. The third part of WP2 will study the medial context for microbe pandemics.

The first part of WP3 explores how the mining industry since the 18th century has been a field of knowledge and practice, where different time scales have become entangled and synchronized. The location for the study will be the Mining Seminar at Kongsberg, Norway, one of the first Mining Seminars in Europe. The second part of WP3 will focus on land reclamation practices, for instance in the Netherlands, asking how the entanglement of time scales and the emergence of new temporal arrangements changes if the engineering practices in question are not involved in removing land masses to discover metals and minerals, but, on the contrary, in amassing them in order to produce new land.

In WP4, we study how entanglements between different time scales give rise to temporal arrangements specific to the field of poltics and government. The first part of WP4 focuses on how the fate of the bodies of state leaders, both their biological frailty and their assumed connectedness with cosmological time scales, in terms of signs from the heavens, has severe consequences for the perceived health of the state. In the second part we scale up to the level of dynasties, which have little or no role in the political thinking of modernity, but nevertheless continue to impose a, less-future-oriented, more circular temporal arrangement, onto the dream of modernization and progress.

The first part of WP5 explores how heritage governance and practices negotiate time as climate change forces a radical temporal shift. In particular we are interested in how industrial heritage contributes to negotiations about geological time and resources, as well as how natural heritage sites are produced as wilderness and “nature”. The second part studies cultural and natural heritage in Syria, especially the inscriptions of heritage as discourse in the “aftermath” of crisis evinced by the ongoing destruction.

The first part of WP6 will investigate the genre of climate fiction but which has had a fertile future historical presence since the 19th century, surviving through conceptual iterations such as disaster fiction, and eco-fiction. The project will investigate how climate change as a discourse with its inherent futuristic bent constructs the link between human/bio futures and planetary/geo futures, and how these are given shape in cultural representations of possible futures. The second part will explore how the human non-human/alien contact and interaction reframes different kinds of time-scales but also itself moves within time, from being a metaphor for European colonial contact with other cultures in the past to the other of technology and the more sophisticated understandings of cohabitation with other lifeforms in the present day.

The first part of WP7 will deal with the possibilities offered by quantum theory within the discipline of history, both for the practice of history and the writing of it. It will explore the larger history of multiple possible worlds and their implications for a new model of time, working through its Enlightenment models in Gottfried Leibniz’s theory of time to its present constitutions through the different “Arrow of time” models, the work of Gilles Deleuze, up to the unified model of “constructor theory.” The second part deals with another field where quantum has found a home: the field of allohistories and “quantum-fiction” within science fiction.

The Research Council of Norway and University of Oslo.