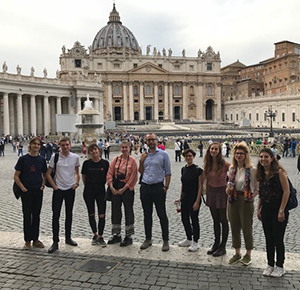 In order to learn more about Ibsen’s life and works in Italy, a group of students attending the course IBS2101/IBS4101 – Ibsen's works: History, Text, Performance went on a week-long study trip to the Eternal City and the Norwegian Institute in Rome (DNIR).

The program of study consisted in a series of seminars on biographical writings about Ibsen’s life in Rome, his Italian sources of inspiration and a discussion of the play Brand. Giuliano D’Amico, associate professor at the Centre for Ibsen Studies, organized the trip together with his colleague, professor Ellen Rees. D’Amico comments the program of study:

“It was important for us to shed light on how the historical events Ibsen witnessed, as well as the artistic experiences he had in Rome, were crucial for his development as a playwright. At the same time, we tried to look critically at the almost mythical status that the roman period has had in Ibsen Studies: it was not an “exile”, as many have claimed, but a Grand Tour where the Norwegian State and Ibsen’s background as a Norwegian played a key role. And we had a chance to discuss all this in the fantastic environment of the DNIR on the Gianicolo.” 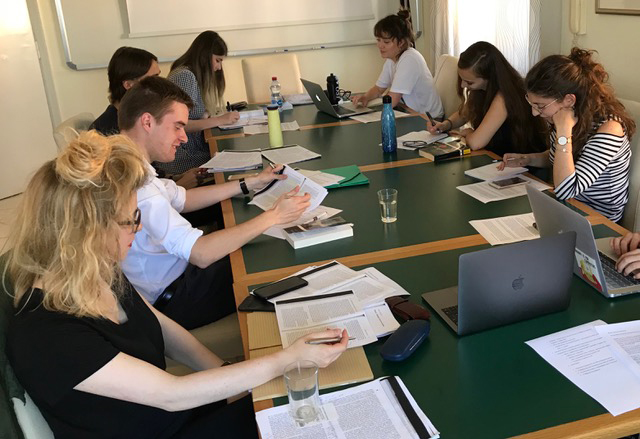 In addition to the seminars, the program included several other activities focused on Ibsen, Rome and Italy. The students visited the Scandinavian Club, where Ibsen was very active during his stays in the city, and followed a guided tour of St. Peter’s Basilica, led by Mattia Biffis, post-doctoral research fellow at DNIR. They could experience the context of the famous letter to Bjørnson that Ibsen wrote on 12 September 1865: “Then one day I went into St. Peter’s – I was on an errand in Rome – and there it at once dawned upon me what was a strong and clear form for what I had to say.” The story tells that Ibsen, after this letter, started to work seriously at Brand.

Last but not least, the students had a possibility to meet and be acquainted with different Italian forums for Ibsen studies. They participated in a workshop at the University of Rome “La Sapienza”, organized by D’Amico and Andrea Berardini, research fellow in Nordic literature. They met the Italian students of Norwegian and they discussed together the relevance Brand has today as a drama about religious fundamentalism. As student Tor Cappelen Rivlin put it, “The Sapienza workshop was one of the highlights!” The students also had a chance to meet the theatre group Vicoquartomazzini, which produced Little Europa, an adaptation of Ibsen’s Little Eyolf (1894). Having watched the performance beforehand, the students engaged in a discussion with the actors on their dramaturgical choices and the interpretation of the adaptation.

Both students and teachers were very happy with the study trip, and D’Amico is already planning a similar program for the autumn semester 2019, hopefully with an even closer collaboration with the University of Rome. As student Amrei Stanzel put it, “it was a scholarly challenging week, but totally worth it!”

By Giuliano D’Amico
E-mail this page