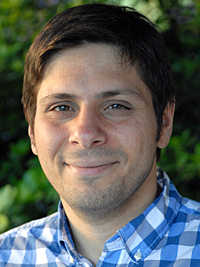 - Please tell us a little bit about your background?

Between 2008 and 2014, I collaborated in several ethnographic projects at the Universities of Fribourg and St. Gallen focusing on the political economy of Swiss multilingualism. In this context, I was particularly interested in the commodification of language and culture under late capitalism and in the articulation between language, education and social inequality.

- What will be the focus of your research at MultiLing?

- My current research project "Gateways to Europe" (2014-2017, MultiLing, University of Oslo) seeks to investigate processes of transnational migration in the southern periphery of the European Union, specifically North African arrivals on the Sicilian coasts (Italy) and the island’s immigration reception centers.

- This ethnographic inquiry investigates the role of language in different key moments of immigrants’ social, political, and economic integration process in Italy and in other European host societies. Particular attention is paid to how language is mobilized – by governmental institutions, corporate actors, and the immigrants themselves – as a key site of possibility – or lack thereof – for people's life trajectories, for the production, circulation, and consumption of resources, and for the construction and maintenance of legitimacies, inequalities, and sociocultural relations of difference.

- And finally, how do you like to spend your free time?

- In my free time I enjoy cooking delicious food and drinking good wine. I am also a passionate football fan and like to discuss sports. It’s a nice break from the serious aspects of life.